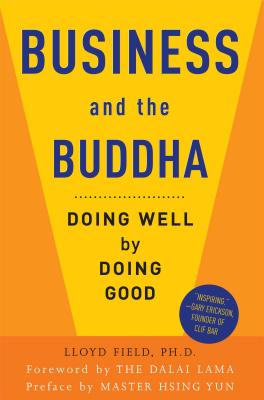 Business and the Buddha

When it comes to business, everyone wants to do well. But can we do good at the same time? Lloyd Field (and, indeed the Dalai Lama, who provides the foreword here) says, unequivocally, Yes. Field's Business and the Buddha lays out the guidelines for putting ideas about individual and corporate social responsibility into practice without sacrificing the bottom line. No longer can business - big or small - afford to focus solely on profit. Real assessment of a business's worth must take into account its consideration of our shared human values, and the realities of our shared planet. That doesn't mean a business can't or shouldn't compete; it means that investing in efforts to build a better society can be, on many levels, an asset. Drawing in a substantial and sophisticated way on traditional Buddhist teachings, Lloyd Field shows how decision-makers and entrepreneurs can achieve new levels of happiness and security both inside and outside the company, and take a power-position as a force for positive global change.

Lloyd Field, PhD, left his position as a corporate Vice President of Human Resources at Johnson and Johnson International to build a new career in Organizational Development and Human Resource consultancy. His clients have included many Fortune 500 organizations and his management development and training audiences have include more than 20,000 managers in North America, Europe, and Asia. His current focus is on helping senior executives solve business problems through Buddhist-influenced coaching and counseling. A classic connector in the Malcolm Gladwell sense of the word Lloyd has sold over 10,000 copies (in Canada) of his previous book on positive employee relations-that book is soon to be in its fifth edition. Lloyd has been interviewed on TV (CTV, City TV) and radio (CBC Radio: As It Happens) on numerous occasions. He is currently on the founding committee of Sarvodaya Canada, an organization committed to promoting community development. As well, Lloyd is the former President of the Board of Nalanda College of Buddhist Studies. His Holiness the Dalai Lama is the spiritual leader of the Tibetan people, a Nobel Peace Prize recipient, and a beacon of inspiration for Buddhists and non-Buddhists alike. He has persistently reached out across religious and political lines and has engaged in dialogue with scientists in his mission to advance peace and understanding in the world. In doing so, he embodies his motto, "My religion is kindness."
Loading...
or
Not Currently Available for Direct Purchase