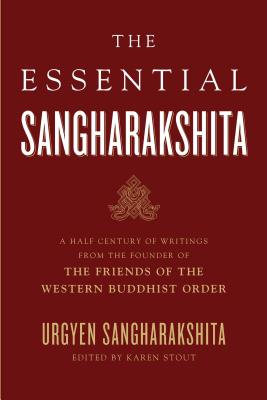 Profoundly knowledgeable and articulate, and equally at home with science, philosophy, myth, art, and poetry, Urgyen Sangharakshita uses every inner avenue to communicate the timeless Dharma to the Western mind. Engaging both the intellect and the heart countless times in a single chapter, the author draws remarkably apt examples from sources as diverse as Orwell, Aeschylus, and Jane Austen. This distilled volume is a primer to the breadth and depth of Buddhist thought and practice.

Urgyen Sangharakshita began studying Buddhism at the age of sixteen. After twenty years studying in India in both the Mahayana and Theravada traditions, he returned to England in 1967 and founded the Friends of the Western Buddhist Order (FWBO), which now has over sixty-five centers worldwide. He is the author and translator of over thirty books on Buddhism. Karen Stout (Vidyadevi) has worked with Sangharakshita as an editor since 1987, as well as editing many other books for Windhorse Publications, UK. She became a member of the Western Buddhist Order in 1993 and was given the ordination name Vidyadevi. The Sanskrit translates as "shining one or goddess of intuitive wisdom and aesthetic appreciation"-an aspiration, not a description, she hastens to add!-but an appropriate one because of her interest in the affinities between Buddhism and Western culture. She has traveled widely and feels special connections with Aryaloka Buddhist Center in New Hampshire and the Buddhist movement in India, both of which continue to be the source of joy and inspiration. She lives with her partner in rural Herefordshire, UK, close to the border between England and Wales.
Loading...
or
Not Currently Available for Direct Purchase