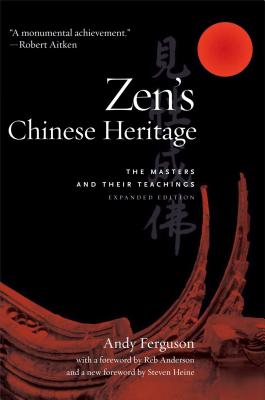 The Masters and Their Teachings

Zen's Chinese Heritage traces twenty-five generations of inlightened Buddhist teachers, supplementing their core teachings with history, biography, and poetry. The result is an intimate and profound human portrait of the enlightened Zen ancients, and an unprecedented look into the depths of the rich cultural heritage. In this new edition with even more valuable material, Ferguson surveys generations of Zen masters, moving chronologically through successive generations of ancestral teachers, supplementing their core teachings with history, biography, and starkly beautiful poetry. In addition to giving the reader the engaging sense of the family history of Zen, this uniquely valuable book paints a clear picture of the tradition's evolution as a religious, literary, and historical force.

A member of the San Francisco Zen Center, Andrew Ferguson is a writer and translator who lives in Petaluma, California. Steven Heine is an authority on Japanese religion and society, especially the history of Zen Buddhism and the life and works of Dogen. He has published two dozen books, including Did Dogen Go to China? and Zen Skin, Zen Marrow. Reb Anderson Roshi moved to San Francisco in 1967 to study Zen Buddhism with Shunryu Suzuki Roshi, who ordained him as a priest in 1970. Since then, he has continued to practice at the San Francisco Zen Center, where he served as abbot from 1986 to 1995 and is now a senior dharma teacher. Anderson Roshi lectures and leads retreats around the world, and is the author of Warm Smiles from Cold Mountains and Being Upright. He lives with his family and friends at Green Dragon Temple, Green Gulch Farm, near Muir Beach, in Northern California.
Loading...
or
Not Currently Available for Direct Purchase