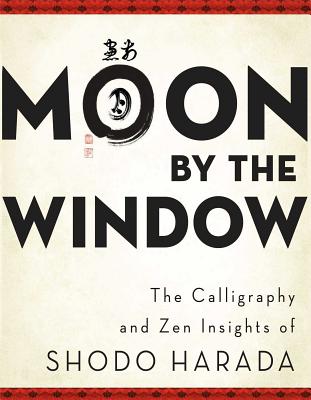 Moon by the Window

The Calligraphy and Zen Insights of Shodo Harada

Shodo Harada is internationally recognized both as a Zen teacher and as a world-class master of the fine art of Zen calligraphy. Harada regularly exhibits and gives calligraphy demonstrations in museums and universities in the U.S. and abroad. Accomplished Zen teachers from across the globe come to further plumb the depths of Zen through studying with him, earning him a reputation as "the roshi's roshi" - which is to say, the master's master. Moon by the Window is a beautiful collection of 108 pieces of Shodo Harada's calligraphic Zen masterpieces - assembled over decades, and drawn from the rich and poetic literature of the Zen tradition. Each work of art is accompanied by Harada Roshi's sharp and glittering commentaries, making each page a spiritually edifying and aesthetically uplifting treasure.

Shodo Harada Roshi is a highly respected Zen teacher and world-class calligrapher, whose students include many American and international Zen teachers. He is the disciple and Dharma heir of Yamada Mumon Roshi, also a renowned Zen master and calligrapher. In this lineage, calligraphies such as the ones in this book are used as one of several powerful means through which to teach the Dharma. Harada Roshi is the abbot of Sogenji Zen Monastery in Okayama, Japan, with plans to take up residence in Whidbey Island, Washington, amid his American Zen community.
Loading...
or support indie stores by buying on