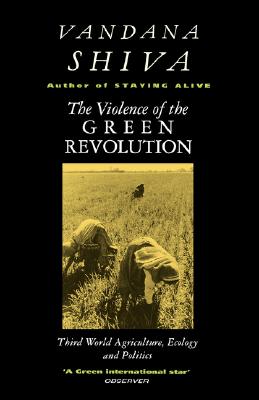 The Violence of the Green Revolution

As the agricultural systems of many countries are poised, as a result of the recent advances in biotechnology for what may soon come to be called the Second Green Revolution, this book is particularly appropriate. Vandana Shiva examined the impact of the first Green Revolution on the breadbasket of India. In a cogent empirical argument, she shows how the 'quick fix' promise of large gains in output pushed aside serious pursuit of an alternative agricultural strategy grounded in respect for the environmental wisdom of peasant systems and building an egalitarian, needs-prientated agriculture consistent with the village-based, endogenous political traditions of Gandhism. Dr Shiva documents the destruction of genetic diversity and soil fertility that resulted and in highly original fashion shows how the Green Revolution also contributed to the acute social and political conflicts now tearing the Punjab apart.

Set in the context of a sophisticated critique of the privileged epistemological position achieved by modern science, whereby it both aspires to provide technological solutions for social and political problems while at the same time disclaiming responsibility for the new problems which it creates in its wake, the author looks to the future in an analysis of a new project to apply the latest Gene Revolution technology to India and warns of the further environmental and social damage which will ensue.

Vandana Shiva was one of India's leading physicists and is now a leading environmental campaigner, the winner of the Alternative Nobel Peace Prize and the author of several books, including Soil not Oil (2008), Earth Democracy (2005) and Stolen Harvest (2001).
Loading...
or support indie stores by buying on