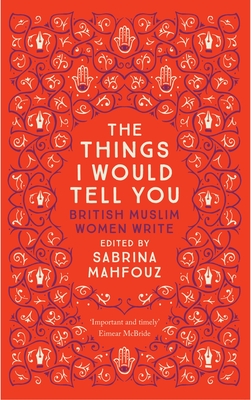 The Things I Would Tell You

A Guardian UK Best Book of the Year

From established literary heavyweights to emerging spoken word artists, the writers in this ground-breaking collection blow away the narrow image of the 'Muslim Woman'.

Hear from users of Islamic Tinder, a disenchanted Maulana working as a TV chat show host and a plastic surgeon blackmailed by MI6. Follow the career of an actress with Middle-Eastern heritage whose dreams of playing a ghostbuster spiral into repeat castings as a jihadi bride. Among stories of honour killings and ill-fated love in besieged locations, we also find heart-warming connections and powerful challenges to the status quo.

From Algiers to Brighton, these stories transcend time and place revealing just how varied the search for belonging can be. Alongside renowned authors such as Kamila Shamsie, Ahdaf Soueif and Leila Aboulela are emerging voices, published here for the first time.

Sabrina Mahfouz is a British Egyptian playwright, poet and screenwriter. She was awarded the 2014 Fringe First Award for her play Chef and her play Clean transferred to New York in 2014. Her poetry has been performed and produced for TV, radio and film, including in the recent Railway Nation: A Journey in Verse on BBC2. Mahfouz has an essay in the award-winning The Good Immigrant and has published eight works of drama with Bloomsbury. She lives in London.