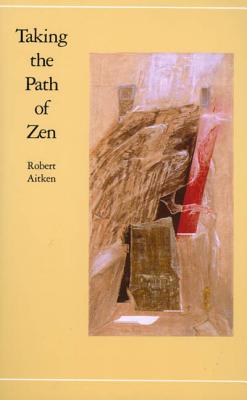 Taking the Path of Zen (Paperback)

There is a fine art to presenting complex ideas with simplicity and insight, in a manner that both guides and inspires. In Taking the Path of Zen Robert Aitken presents the practice, lifestyle, rationale, and ideology of Zen Buddhism with remarkable clarity.

The foundation of Zen is the practice of zazen, or mediation, and Aitken Roshi insists that everything flows from the center. He discusses correct breathing, posture, routine, teacher-student relations, and koan study, as well as common problems and milestones encountered in the process. Throughout the book the author returns to zazen, offering further advice and more advanced techniques. The orientation extends to various religious attitudes and includes detailed discussions of the Three Treasures and the Ten Precepts of Zen Buddhism.
Taking the Path of Zen will serve as orientation and guide for anyone who is drawn to the ways of Zen, from the simply curious to the serious Zen student.

Robert Aitken (1917-2010) was Roshi of the Diamond Sangha in Honolulu and the author of Taking the Path of Zen and The Mind of Clover. His introduction to Zen came in a Japanese prison camp during World War II, after he was captured as a civilian in Guam. R. H. Blyth, author of Zen in English Literature, was imprisoned in the same camp, and in this unlikely setting Aitken began the first of several important apprenticeships. After the war Aitken returned often to Japan to study. He became friends with D. T. Suzuki, and studied with Nagakawa Soen Roshi and Yasutani Hakuun Roshi. In 1959 Robert Aitken and his wife, Anne, established a Zen organization, the Diamond Sangha. Aitken was given the title "Roshi" and authorized to teach by Yamada Koun Roshi in 1974.

Praise For Taking the Path of Zen…

“I welcome with great pleasure Robert Aitken Roshi's introduction to Zen practice, Taking the Path of Zen. I feel this will be a valuable source of information and inspiration both for those who have a passing interest in the subject and those who have determined to set out on the path of Zen themselves.

As an American who has trained in Zen practice for many years Aitken Roshi has a special understanding of the problems and questions which plague Western students of Zen. His book will thus be a godsend for people who have sought an introduction to Zen in their own language, free of the foreignisms that cultural differences can produce.

It is my sincere wish that this work will gain the wide readership it so deserves.” —Yamada Koun Roshi