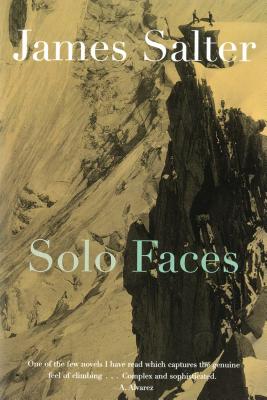 Solo Faces exposes the obsession that draws climbers away from civilization to test themselves against the most intimidating and inaccessible mountains in the world.

James Salter's novel captures the adventure of Gary, a roofer of churches, who feels restrained by conventions and flat ground. Unable to find happiness in his life, he travels to southern France to climb to the summits of the Alps. He finds peace and happiness within himself soon after. But when fellow climbers are trapped on the mountain, he makes a daring one-man rescue during a storm that brings him the notice he has always shunned. But the glory quickly dissipates and he returns to the anonymity he prefers, having thoroughly satisfied himself.


Praise For Solo Faces: A Novel…

“Solo Faces contrasts a devotion to mountain climbing with the earthbound tugs of love and ordinary life . . . A beautifully composed book that will remind readers of Camus and Saint-Exupery. It exemplifies the purity it describes.” —Michael Dirda, The Washington Post

“[Salter is in] the great modern tradition of Conrad and Hemingway and Malraux.” —Samuel Hynes, The New York Times Book Review

“A terrific novel--compelling, sad, wise, and kindhearted. Mr. Salter's prose is rare and stunning . . . How energizing it is to read a novel with a real hero in it--and a real hero he is.” —John Irving