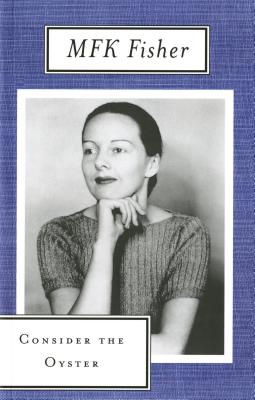 M.F.K. Fisher, whom John Updike has called our "poet of the appetites," here pays tribute to that most delicate and enigmatic of foods---the oyster. As she tells of oysters found in stews, in soups, roasted, baked, fried, prepared à la Rockefeller or au naturel--and of the pearls sometimes found therein--Fisher describes her mother's joy at encountering oyster loaf in a girls' dorm in he 1890's, recalls her own initiation into the "strange cold succulence" of raw oysters as a young woman in Marseille and Dijon, and explores both the bivalve's famed aphrodisiac properties and its equally notorious gut-wrenching powers. Plumbing the "dreadful but exciting" life of the oyster, Fisher invites readers to share in the comforts and delights that this delicate edible evokes, and enchants us along the way with her characteristically wise and witty prose.

Praise For Consider the Oyster…

“Since Lewis Carroll no one had written charmingly about that indecisively sexed bivalve until Mrs. Fisher came along with her Consider the Oyster. Surely this will stand for some time as the most judicious treatment in English.” —Clifton Fadiman

Mary Frances Kennedy Fisher (1908-1992) is the author of sixteen books of essays and reminiscences, many of which have become American classics. Her books include The Gastronomical Me and How to Cook a Wolf. In 1991, she was elected to the American Academy and Institute of Arts and Letters.
Loading...
or support indie stores by buying on