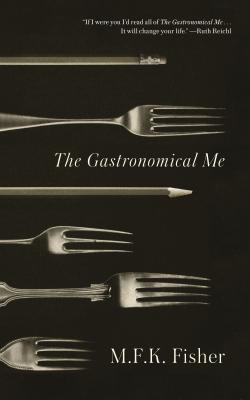 In 1929, a newly married M.F.K. Fisher said goodbye to a milquetoast American culinary upbringing and sailed with her husband to Dijon, where she tasted real French cooking for the first time. The Gastronomical Me is a chronicle of her passionate embrace of a whole new way of eating, drinking, and celebrating the senses. As she recounts memorable meals shared with an assortment of eccentric and fascinating characters, set against a backdrop of mounting pre-war tensions, we witness the formation not only of her taste but of her character and her prodigious talent.


Praise For The Gastronomical Me…

“I do not know of any one in the United States who writes better prose.” —W.H. Auden

“Poet of the appetites.” —John Updike

“Because The Gastronomical Me is autobiographical, following Mrs. Fisher from childhood to widowhood in different countries, we are able to see its food not only as a matter of personal taste, but as a perpetual emotional and social force within a life. Here are meals as seductions, educations, diplomacies, communions. Unique among the classics of gastronomic writing, with its glamorous but not glamorized settings, its wartime drama and its powerful love story, The Gastronomical Me is a book about adult loss, survival, and love.” —Patricia Storace, The New York Review of Books

“She writes about fleeting tastes and feasts vividly, excitingly, sensuously, exquisitely. There is almost a wicked thrill in following her uninhibited track through the glories of the good life.” —James Beard

“She writes about food as others do about love, but rather better.” —Clifton Fadiman

M. F. K Fisher (1908-1992) is the author of sixteen books of essays and reminiscences, many of which have become American classics. Her books include The Gastronomical Me and How to Cook a Wolf. In 1991, she was elected to the American Academy and Institute of Arts and Letters.
Loading...
or support indie stores by buying on