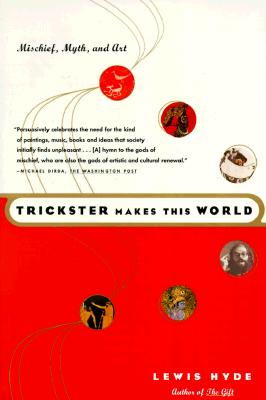 "Trickster Makes This World "solidifies Lewis Hyde's reputation as, in Robert Bly's words, "the most subtle, thorough, and brilliant mythologist we now have." In it, Hyde now brings to life the playful and disruptive side of human imagination as it is embodied in trickster mythology. He first revisits the old stories--Hermes in Greece, Eshu in West Africa, Krishna in India, Coyote in North America, among others--and then holds them up against the life and work of more recent creators: Picasso, Duchamp, Ginsberg, John Cage, and Frederick Douglass. Authoritative in its scholarship, loose-limbed in its style, "Trickster Makes This World "ranks among the great works of modern cultural criticism.

Praise For Trickster Makes This World: Mischief, Myth, and Art…

"Persuasively celebrates the need for the kind of paintings, music, books and ideas that society initially finds unpleasant...[A] hymn to the gods of mischief, who are also the gods of artistic and cultural renewal."--Michael Dirda, The Washington Post

"Hyde is one of our true superstars of nonfiction."--David Foster Wallace

"Brilliant...By the time he is done he has folded language, culture, and the very habit of being human into his ken."--The New Yorker

"[Trickster] should be ready by anyone interested in the grand and squalid matter of all things human..."--Margaret Atwood, Los Angeles Times