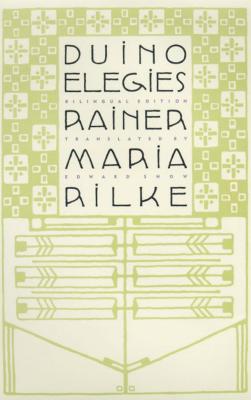 Who, if I cried out, would hear me among the angelic
orders? and even if one of them pressed me
suddenly to his heart: I'd be consumed
in that overwhelming existence. For beauty is nothing
but the beginning of terror, which we can just barely endure,
and we stand in awe of it as it coolly disdains
to destroy us. Every angel is terrifying.
-from "The First Elegy"

Over the last fifteen years, in his two volumes of New Poems as well as in The Book of Images and Uncollected Poems, Edward Snow has emerged as one of Rainer Maria Rilke's most able English-language interpreters. In his translations, Snow adheres faithfully to the intent of Rilke's German while constructing nuanced, colloquial poems in English.

Written in a period of spiritual crisis between 1912 and 1922, the poems that compose the Duino Elegies are the ones most frequently identified with the Rilkean sensibility. With their symbolic landscapes, prophetic proclamations, and unsettling intensity, these complex and haunting poems rank among the outstanding visionary works of the century.

“I have been engrossed in English versions of the Duino Elegies for years, and Snow's is by far the most radiant and, as far as I can tell, the most faithful . . . Reading this rendition provided new revelations into Rilke's symbolic landscapes of art, death, love, and time.” —Frederic Koeppel, The Commercial Appeal (Memphis)

“This translation of the Elegies is the finest that I have ever read . . . Snow has gradually been building a reputation as Rilke's best contemporary translator in English. His version of the Elegies should cement that reputation, and elevate it.” —Brian Phillips, The New Republic

Edward Snow is a professor of English at Rice University. He is the recipient of an Academy of Arts and Letters Award for his Rainer Maria Rilke translations and has twice received the Academy of American Poets' Harold Morton Landon Translation Award. He is the author of A Study of Vermeer and Inside Bruegel.
Loading...
or support indie stores by buying on