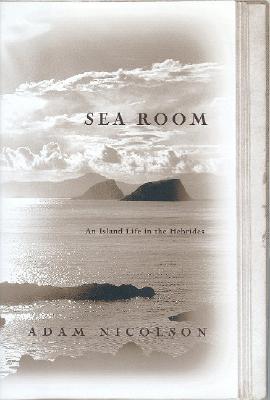 An Island Life in the Hebrides

A riveting book for all readers who know and love a place where the sea meets the land.

In 1937, Adam Nicolson's father answered a newspaper ad -- "Uninhabited islands for sale. Outer Hebrides, 600 acres . . . Puffins and seals. Apply . . . " -- and found the Shiants (the name means holy or enchanted islands). Adam inherited this almost indescribably beautiful property when he was twenty-one: Sea Room describes, and relives, his love affair with the three tiny islands, composed as he prepares to give them to his oldest son.

The Shiants lie east of the Isle of Lewis in a treacherous sea once known as the "stream of blue men," after the legendary water spirits who menaced sailors there. For millennia they were a haven for those seeking solitude -- an eighth-century hermit, the twentieth-century novelist Sir Compton Mackenzie -- but their rich, sometimes violent history of human habitation includes much more. The landscape is soaked in centuries-old tales of restless ghosts and Bronze Age gold, and it cradles the heritage of a once productive world of farmers and fishermen. In passionate, keenly precise prose, Nicolson evokes the paradoxes of island life: cut off from the mainland yet intricately bound to it, austere yet fertile, unforgiving yet bewitchingly beautiful.

Sea Room does more than celebrate this unique, profoundly isolated place. It shares with us the greatest gift an island bestows on its inhabitants, a deep, revelatory engagement with the natural world.