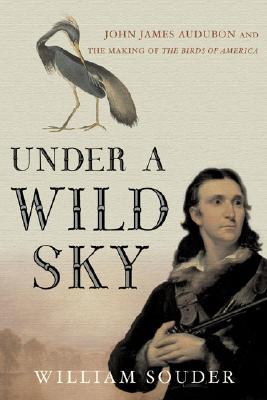 Under a Wild Sky (Hardcover)

John James Audubon and the Making of The Birds of America

In the century and a half since Audubon's death, his name has become synonymous with wildlife conservation and natural history. But few people know what a complicated figure he was--or the dramatic story behind The Birds of America.

Before Audubon, ornithological illustrations depicted scaled-down birds perched in static poses. Wheeling beneath storm-wracked skies or ripping flesh from freshly killed prey, Audubon's life-size birds looked as if they might fly screeching off the page. The wildness in the images matched the untamed spirit in Audubon--a self-taught painter and self-anointed aristocrat who, with his buckskins and long hair, wanted to be seen as both a hardened frontiersman and a cultured man of science.

In truth, neither his friends nor his detractors ever knew exactly who Audubon was or where he came from. Tormented by a fog of ambiguities surrounding his birth, he reinvented himself ceaselessly, creating a life as dramatic as his fictionalizations of it. But when he came east at thirty-eight--broke and desperate to find a publisher for his Birds--he ran squarely into a scientific establishment still wedded to convention and suspicious of the brash newcomer and his grandiose claims.

It took Audubon fifteen years to prevail in both his project and his vision. How he triumphed and what drove him is the subject of this gripping narrative.


Praise For Under a Wild Sky: John James Audubon and the Making of The Birds of America…

"Souder renders a fascinating portrait not only of Audubon but of the America he knew, a place so lush and fertile it seems almost mythical. But those drawings--foundational American documents--prove it was so, and this book makes new and compelling sense of them and their creator." --Bill McKibben

"In Under a Wild Sky, William Souder superbly captures John James Audubon in all his infuriating, contradictory, admirable richness--publicly vainglorious while consumed by self-doubt, a chronic liar and buckskin-clad charmer, an artistic visionary and peerless naturalist a generation ahead of his time. Souder splendidly evokes the colorful characters that surrounded him, the wild, rough-edged, game-rich American frontier where he found his life's calling, the gritty streets of Europe and the scientific politics of Philadelphia and London--but at the core of UNDER A WILD SKY stands Audubon, brought to fascinating, enigmatic life, the man who forever changed how we see the natural world." --Scott Weidensaul