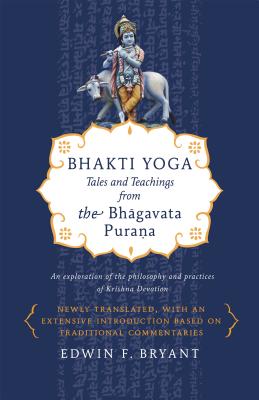 Tales and Teachings from the Bhagavata Purana

“Teachers and students, scholars and practitioners of religion like, will be sure to keep this volume on hand in their research and for the sake of practice.” —Francis X. Clooney, S.J., Director of the Center for the Study of World Religions, Harvard University

Bhakti yoga has been by far the most common form of yoga practiced in India for more than two millennia. Although The Yoga Sutras of Patañjali has become the canonical text for yoga philosophy and practice in the West, few in India either presently or historically have actually read or even know about it. Most Hindus across the centuries have gained their yoga philosophy from the stories of great yogi exemplars found in the bhakti literature of the subcontinent.

In simplest terms, bhakti is the heartfelt practice of love and devotion to God. In Western yoga circles, the term is often associated with the increasingly popular practice of kirtana, or chanting in a group or at large gatherings. But bhakti yoga is far more complex and ancient, and embraces many strands and practices. Edwin F. Bryant focuses on one important school of bhakti as a way into understanding this practice in general. He explores a Krsna tradition in depth to show what bhakti is and how it is expressed. He supplies his own translations of central texts from the tradition in the form of tales and teachings drawn from arguably the most influential text on bhakti, called the Bhagavata Purana, or the Beautiful Legend of God. And he compares and contrasts them with the bhakti practices outlined in The Yoga Sutras of Patañjali.

This clarifying study establishes a baseline for understanding bhakti yoga, and will be welcomed by students and devotees of the spiritual heritage of India.

Features of this new edition:
-An extensive introduction to the definition and practices of bhakti
-Original Translations of key tales and teachings from the Bhagavata Purana
-Translations of some of the popular stories from Krsna’s incarnation
-Translation of the Bhakti Sutras
-Translation of the Siksastakam, the eight instructional verses on bhakti by Caitanya Mahaprabhu
-An essay on the Purana and Vedic literature
-A glossary, endnotes, and a bibliography


Praise For Bhakti Yoga: Tales and Teachings from the Bhagavata Purana…

"Bryant is an accomplished, helpful, and humble guide to this intriguing tradition, which is still largely unexplored in the West." —Publishers Weekly

Edwin F. Bryant received his PhD in Indology from Columbia University. He is a professor of Hindu religion and philosophy at Rutgers University, and also teaches workshops on the yoga sutras and other Hindu texts in yoga communities around the world. He is the author of The Yoga Sutras of Patañjali from North Point Press.
or support indie stores by buying on
(This book is on backorder)