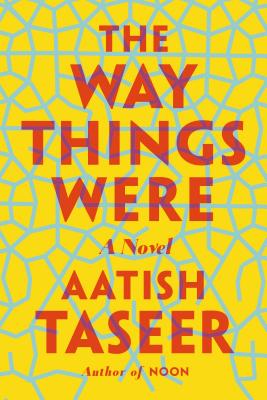 The Way Things Were (Hardcover)

The Way Things Were opens with the death of Toby, the Maharaja of Kalasuryaketu, a Sanskritist who has not set foot in India for two decades. It falls to his son, Skanda, to return Toby's body to his birthplace, "a tin-pot kingdom" not worth "one air-gun salute." This journey takes him halfway around the world and returns him to his family, the drawing-room elite of Delhi, whose narcissism and infighting he has worked hard to escape. It also forces him to reckon with his parents' marriage, a turbulent love affair that began in passion but ended in pain and futility.
Aatish Taseer's The Way Things Were takes its title from the Sanskrit word for history, itihasa, whose literal translation is "the way things indeed were." It is both an intimate portrait of a family and a panoramic vision of the last half century of life in Delhi, with Sanskrit woven in as central metaphor and chorus. Through one man's struggle with his inheritance, it explores the cultural schizophrenia of modern India and the difficulty of building honestly on the past.

Aatish Taseer was born in 1980. He is the author of the memoir Stranger to History: A Son’s Journey Through Islamic Lands and three acclaimed novels: The Way Things Were, a finalist for the 2016 Jan Michalski Prize; The Temple-Goers, which was short-listed for the Costa First Novel Award; and Noon. His work has been translated into more than a dozen languages. He is a contributing writer for The International New York Times and lives in New Delhi and New York.

Praise For The Way Things Were: A Novel…

“Aatish Taseer's ambitious, searching, highly readable novel of ideas is many things at once: a stinging, sharply observed chronicle of upper-class drawing room politics; a grappling with the modern Indian state; and an argument of how language shapes the ambitions and self-image of an entire culture.” —Hanya Yanagihara

“A ravishing tale of modern India . . . Weighty material-Sanskrit scholars and the politics of Indira Gandhi for starters-is leavened with humor, humanity and passionate romance. A serious saga you can't put down.” —People, "The 12 Best New Books"

“Under normal circumstances, I am a dog-earer of books . . . A mediocre book will have a few such scars. A great one will look ragged. But I wrecked my copy of Aatish Taseer's new novel, The Way Things Were, folding the corners of so many pages and planting so many scraps of paper amid the chapters that it sits now, swollen, on my desk like a patient after gum surgery.

There are a lot of books which take small things and make them epic; fewer which can encompass the scope of the epic still make time for the small, personal details. Almost no book can do both. And there are very few books out there that you can open, knowing nothing, stab down a finger and find a line or a paragraph lovely enough, even in isolation, to be worth scrawling down somewhere or tattooing on your neck.

The Way Things Were does it all. Pinballs, in fact, between the close and the epic with remarkable alacrity and balance. Taseer is a writer at the peak of his skill, giving the finger to hubris and rarely putting a foot wrong as he churns through a literary minefield of multiple narrators, nested time frames, 40 years of messy, modern Indian history, and a central motif which rests on the cognates and etymological contortions of a dead language . . .

There is, astoundingly, among all these hundreds of words, rarely a dull moment . . . And rarely a page without something beautiful to behold.” —Jason Sheehan, NPR Books

“Taseer's book is a cut above the rest. Colonialism, racism, sectarian violence, class tension, and the rise of the Indian nouveau riche are all handled with a delicate touch. This is a difficult book to put down, and readers will enjoy every minute of it, as well as learning about contemporary Indian culture.” —Publishers Weekly (starred review)

“Taseer is fascinated by language to the point that his characters speak in fully formed philosophical paragraphs . . . what they say here . . . about India, love, family and the accommodations inherent in every life, is intensely engrossing. What [Taseer] has done with great intelligence and elegance is to deliver a novel of ideas in the guise of a very human story.” —Michael Prodger, Financial Times

“[The Way Things Were is] a novel where characters are 'encircled by history' . . . Taseer's great gift is to locate the fault line--of both individuals and a nation--in the midst of epic upheavals.” —Vanity Fair

“Taseer's wide and analytical perspective has something in common with contemporaries Amit Chaudhuri and Neel Mukherjee, but his style--at once highly intellectual and deeply poetic--is unique . . . This immense and intense [novel] . . . is a substantive contribution to new writing from the subcontinent.” —Amanda Hopkinson, The Independent

“The Way Things Were is [an] ambitious novel, in which Taseer seeks to reconcile the ancient mysteries of classical Vedic culture with the overcrowded, politico-religious minefield of modern India.” —Alfred Hickling, The Guardian

“The Way Things Were . . . shows [Taseer] to be both an accomplished novelist and commentator. In delving beneath the surface, he has vividly exposed the quarrels and quandaries of an India undergoing rapid historical and social change.” —Will Nicoll, The Spectator