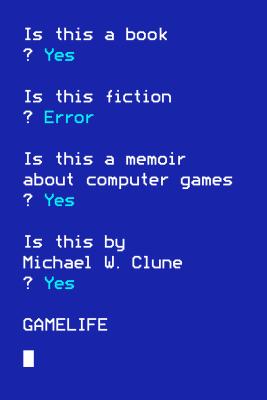 You have been awakened.

Floppy disk inserted, computer turned on, a whirring, and then this sentence, followed by a blinking cursor. So begins Suspended, the first computer game to obsess seven-year-old Michael, to worm into his head and change his sense of reality. Thirty years later he will write: "Computer games have taught me the things you can't learn from people."

Gamelife is the memoir of a childhood transformed by technology. Afternoons spent gazing at pixelated maps and mazes train Michael's eyes for the uncanny side of 1980s suburban Illinois. A game about pirates yields clues to the drama of cafeteria politics and locker-room hazing. And in the year of his parents' divorce, a spaceflight simulator opens a hole in reality.

In telling the story of his youth through seven computer games, Michael W. Clune captures the part of childhood we live alone.


Praise For Gamelife: A Memoir…

"Unconventionally plotted and oddly moving . . . GAMELIFE argues that our hidden inner world, 'the part of our lives that wasn't involved with people,' can save us in an outside world that doesn't always make us feel whole." —Ethan Gilsdorf, The New York Times Book Review

“Clune’s book shows us just how intimate and intense the engagement with video games can be… The book moves in counterpoint, alternating in short subchapters between interior and exterior, life and game, letting the two halves of Clune’s experience jostle against each other in unexpected ways.” —Gabriel Winslow-Yost, The New York Review of Books

"I never played the games Clune devotes most of his attention to, but his voice makes their obsolete rituals come alive: Sometimes he sounds like a thriller writer, sometimes an art critic, sometimes a poet." —Christian Lorentzen, Vulture

"In the end, video games were formative for Clune simply because he played them, and he loved them, and he hasn’t forgotten the thrills that accompanied and even agitated his intellectual awakening. Arguably, it is his talent as a writer that gives his games their significance and sets them meaningfully into the sweep of his personal history." —Simon Parkin, The New Yorker Page-Turner

"Beyond the brilliant observations that seem to pop up on every page, the scenes of Clune’s childhood make for equally compelling reading, dramatically rendered as they are in rich novelistic prose... There are more funny scenes than seems possible in a book of 200 pages." —Christopher Urban, The Millions

“Clune’s memoirs will take over your brain, too, but in the opposite way: they will make you more human, by doubling down on your capacity for empathy, as the best literature tends to do. They will leech compassion from your center and radiate it out though your pores, where you will worry others will see it and stare. These are books you should read if you’re interested in being alive on earth. White or male or no, drug addict or no, gamer or no.” —Ian Bogost, Los Angeles Times Review of Books

“There’s no one who writes quite like [Michael Clune]. . . .Gamelife is a spectacular accomplishment.” —The New Republic

"Ultimately, however, the games serve as the framework with which he explores his childhood, not the other way around. The result is an unexpectedly aching exploration of growing up." —Trevor Levin, The Harvard Crimson

"Clune’s work is an immersive tale of obsession from the virtual frontline." —The Australian

“Many of the issues that [Gamelife] raises--the plight of the boy at the dawn of the Internet, trying to process suburbia, divorce, and alienation from would-be friends--have wider resonance. Clune never treats games as an escape but rather an entry into a heightened reality, an education, a creative stimulus, and a portal for self-discovery . . . [a] provocative book.” —Kirkus Review

“[Gamelife] is an extremely well-written retrospective . . . [Clune] succeeds in not only sharing poignant memories but also confronting the rose-tinted glasses we tend to wear when discussing the past.” —Lewis Parsons, Library Journal

“Along with his spot-on re-creations of childhood and adolescent conversations, Clune's wry observations about growing up in the 1970s and 1980s amid the burgeoning microcomputer revolution make his gamer memoir a standout.” —Carl Hays, Booklist

“I steal language and ideas from Michael W. Clune.” —Ben Lerner, author of 10:04

“[Gamelife] feels definitive and memorable . . . Clune reminds us that we’re in a more important era than we realize, that these games are not for nerds but for explorers, that they’re not about beating the undefeated but besting yourself, seeing yourself in rhetorical fables, in binary operations with moralistic consequences. It’s Shakespearean in the same way that chess is philosophical.” —Ben Siegel, The Buffalo News

“Michael W. Clune's Gamelife captures the wonder of being a child more durably than even the games he writes about. Gamelife is a book about the way games used to be: when demons were nothing more than a vaguely threatening cluster of blocks, and a dystopian future could play out in text alone. Inspired by the book, I downloaded an Apple IIc emulator and loaded up The Bard's Tale for the first time in twenty-five years . . . but it wasn't quite the same. I can replay and reenact by reinstalling-but I could only relive by reading this book.” —Christian Rudder, founder of OkCupid and author of Dataclysm

“Michael W. Clune has written a brilliant and fiercely moving memoir that goes beyond mere nostalgia for the simpler days of MS-DOS. This is a book about human imagination and the ways in which it's nourished; it's about the metaphysics of role-playing, the poetics of 2-D space. Gamelife is a portrait of the artist as a young gamer, and like its predecessor, White Out, the book's ultimate power comes from its author's ability to render the mundane both terrifying and ecstatic through the kaleidoscopic filter of subjective experience.” —Adam Wilson, author of Flatscreen and What’s Important Is Feeling

“In Gamelife, as in White Out, Clune combines banality, fear, and beauty in a way that is both original and disturbingly familiar. His memoirs read like the very best fiction.” —Rae Armantrout, author of Just Saying

Michael W. Clune is a professor of English at Case Western Reserve University. He is the author of a memoir titled White Out: The Secret Life of Heroin and of two scholarly books, American Literature in the Free Market andWriting Against Time.