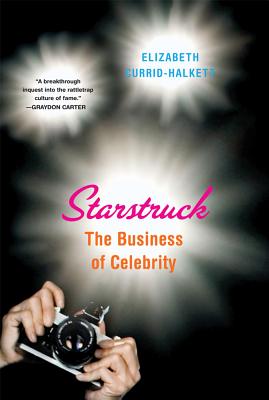 The Business of Celebrity

The author of The Warhol Economy asks how does celebrity work and why do we care about some people more than others? What is celebrity? Why is it such a dominant force in our culture? And why do we seem preoccupied with it now more than ever?


Celebrity—our collective fascination with particular people—is everywhere and takes many forms, from the sports star, notorious Wall Street tycoon, or film icon, to the hometown quarterback, YouTube sensation, or friend who compulsively documents his life on the Internet. We follow with rapt attention all the minute details of stars' lives: their romances, their spending habits, even how they drink their coffee. For those anointed, celebrity can translate into big business and top social status, but why do some attain stardom while millions of others do not? Why are we simply more interested in certain people?

Elizabeth Currid-Halkett presents the first rigorous exploration of celebrity, arguing that our desire to "celebrate" some people and not others has profound implications, elevating social statuses, making or breaking careers and companies, and generating astronomical dividends. Tracing the phenomenon from the art world to tabletop gaming conventions to the film industry, Currid-Halkett looks at celebrity as an expression of economics, geography (both real and virtual), and networking strategies.

Starstruck brings together extensive statistical research and analysis, along with interviews with top agents and publicists, YouTube executives, major art dealers and gallery directors, Bollywood players, and sports experts. Laying out the enormous impact of the celebrity industry and identifying the patterns by which individuals become stars, Currid-Halkett successfully makes the argument that celebrity is an important social phenomenon and a driving force in the worldwide economy.


Praise For Starstruck: The Business of Celebrity…

“In the age of Facebook and Twitter, Starstruck is a breakthrough inquest into the rattletrap culture of fame. Elizabeth Currid-Halkett casts her line remarkably far upstream to hook her reader, reels in the true meaning of contemporary éclat, and guts the residual billions that back it.” —Graydon Carter

“Starstruck makes me supremely glad of two things. First, that Elizabeth Currid-Halkett has produced this in-depth, intelligent, and passionate book on the shiny phenomenon of celebrity. Second, that I'm not famous.” —Sloane Crosley, author of How Did You Get This Number

“Elizabeth Currid-Halkett is a keen observer of popular culture and the contemporary world around us. Through her in-depth research and accessible writing style she convincingly demonstrates celebrity's social and economic importance. Currid-Halkett proves she is one of the brightest thinkers and scholars of her generation.” —Richard Florida, author of The Rise of the Creative Class

“This splendid book is the best treatment of celebrity today. It shows how modern celebrity can be understood, how much the culture of celebrity is big business, and how much celebrity matters for understanding each and every one of our lives.” —Tyler Cowen, author of Discover Your Inner Economist, and coauthor of the Marginal Revolution blog

“A brilliant, in-depth examination of that rather slippery condition we call celebrity. Starstruck weaves together an astounding mix of elements and shows us how we all actually contribute to and share in the making of celebrity. In a wonderful cultural turn, Elizabeth Currid-Halkett captures some of the reasons that people do the hard work of tracking and allocating celebrity.” —Saskia Sassen, author of A Sociology of Globalization and The Global City

“With analytic gusto, Elizabeth Currid-Halkett takes on a force larger than the stars––the underlying system that demarcates a few specific others as worthy of special attention and as a basis for emulation, amusement, and investment. Celebrity is, Starstruck convincingly shows, an omnipresent basis of social organization. This book gives it, at long last, appropriate dignity as a topic for serious inquiry.” —Harvey Molotch, author of Where Stuff Comes From

“By tackling America's current condition of free-news oversaturation and ubiquitous fixation with celebrities, Currid-Halkett (Policy, Planning, and Development/Univ. of Southern California; The Warhol Economy: How Fashion, Art and Music Drive New York City, 2007) asks how much celebrity-dominated airwaves, newspapers, magazines and conversations distract us from more meaningful issues. "[O]n the whole," she writes, "many of us care far more about [Jennifer] Aniston's latte than the thousands being murdered in Sudan." The author backs up her case by citing solid studies, interviews and statistics--including the number of times a celebrity is photographed in a year, or how many events he/she attends--all of which she weaves together with accessible language while maintaining narrative momentum. She defines celebrity as the phenomenon of society valuing certain individuals for reasons that outweigh--or are entirely unrelated to--their talent. It's this key difference, she argues, between how much attention should be paid to someone (due to their talent) and how much attention is actually given, that accounts for "celebrity residual." This is most likely to show up in the fields of entertainment, sports and politics. More than anything else, people respond to visual stimuli, which, to a large extent, explains Paris Hilton's camera-friendly rise to become the "ultimate celebrity." There's also the relatively recent sphere of reality-TV stars, like the Gosselins or Kardashians--talentless people who captured the public's interest. Celebrity permeates every level of society, and Currid-Halkett deftly tracks how this democratic celebrity--of both mainstream stars as well as, say, the local high-school quarterback or an incessantly updating Facebook friend--reveals how the world is organized. She looks at the economics, accounting for all the money made by photographing celebrities, and the roots and duration of stardom. The book raises surprisingly uncomfortable questions, including why society is so invested in people who, for all intents and purposes, could be fictional characters for how little impact they have on our reality. Approachable and thorough.” —Kirkus Reviews

Elizabeth Currid-Halkett is the author of The Warhol Economy and an assistant professor of sociology at the University of Southern California. She holds a PhD in urban planning from Columbia University and divides her time between New York and Los Angeles.
Loading...
or support indie stores by buying on