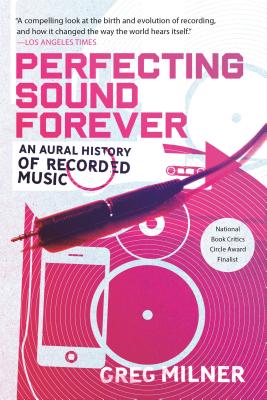 An Aural History of Recorded Music

In 1915, Thomas Edison proclaimed that he could record a live performance and reproduce it perfectly, shocking audiences who found themselves unable to tell whether what they were hearing was an Edison Diamond Disc or a flesh-and-blood musician. Today, the equation is reversed. Whereas Edison proposed that a real performance could be rebuilt with absolute perfection, Pro Tools and digital samplers now allow musicians and engineers to create the illusion of performances that never were. In between lies a century of sonic exploration into the balance between the real and the represented.

Tracing the contours of this history, Greg Milner takes us through the major breakthroughs and glorious failures in the art and science of recording. An American soldier monitoring Nazi radio transmissions stumbles onto the open yet revolutionary secret of magnetic tape. Japanese and Dutch researchers build a first-generation digital audio format and watch as their "compact disc" is marketed by the music industry as the second coming of Edison yet derided as heretical by analog loyalists. The music world becomes addicted to volume in the nineties and fights a self-defeating "loudness war" to get its fix.

From Les Paul to Phil Spector to King Tubby, from vinyl to pirated CDs to iPods, Milner's Perfecting Sound Forever pulls apart musical history to answer a crucial question: Should a recording document reality as faithfully as possible, or should it improve upon or somehow transcend the music it records? The answers he uncovers will change the very way we think about music.

“Perfecting Sound Forever is an exhaustively researched, extraordinarily inquisitive book that dissects the central question within all music criticism: When we say that something sounds good, what are we really saying? And perhaps more importantly, what are we really hearing?” —CHUCK KLOSTERMAN

“A compelling look at the birth and evolution of recording, and how it changed the way the world hears itself.” —MARC WEINGARTEN, Los Angeles Times

“Greg Milner tells the story of recorded music with novelistic verve, ferocious attention to detail, and a soulful ambivalence about our quest for sonic perfection. He shows how great recordings come about not through advances in technology but through a love of the art, and that same love is the motor of his prose.” —Alex Ross, author of The Rest Is Noise

“You may never listen to Lady Gaga the same way again . . . [Milner is] a gifted storyteller with an ear for absurdity . . . You might not think a book about reverb could thrill. Milner's does.” —MIKAEL WOOD, Time Out New York

“Very, very, very few books will change the way you listen to music. This is one such book. Read it.” —JARVIS COCKER

Greg Milner is a senior contributing writer and columnist for Spin magazine. His work also appears in Slate, Salon, the Village Voice, Wired, and other publications. He is the author of Perfecting Sound Forever.
Loading...
or support indie stores by buying on