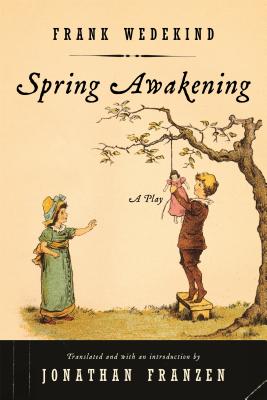 Featuring an introduction by Franzen.

First performed in Germany in 1906, Frank Wedekind's controversial play Spring Awakening closed after one night in New York in 1917 amid charges of obscenity and public outrage. For the better part of the twentieth century Wedekind's intense body of work was largely unpublished and rarely performed. Yet the play's subject matter—teenage desire, suicide, abortion, and homosexuality—is as explosive and important today as it was a century ago. Spring Awakening follows the lives of three teenagers, Melchior, Moritz, and Wendl, as they navigate their entry into sexual awareness. Unlike so many works that claim to tell the truth of adolescence, Spring Awakening offers no easy answers or redemption.

Today, more than a hundred years after the play's first performance, a new musical version of this essential modern masterpiece is being hailed as the "best new musical . . . in a generation" (John Heilpern, The New York Observer). Franzen's rendition of the text—for so long poorly served in English—is unique in capturing the bizarre and inimitable comic spirit that animates almost every line of this unrelentingly tragic play. There couldn't be a better time for this thrilling, definitive new translation.


Praise For Spring Awakening: A Play…

“Spring Awakening is the best play ever written about teenagers, and Jonathan Franzen's fraught yet buoyant translation is the best I've ever read. In a culture where lies about adolescence prevail, this funny and honest play is more relevant than ever. Spring Awakening is essential reading.” —Christopher Shinn

Frank Wedekind (1864-1918) had a seminal effect on the development of twentieth-century German drama. His plays portray a society riven by the demands of lust and greed, and his powerful writing continues to disturb and shock; his plays were still being refused a performing license in Britain in the 1960s.

Jonathan Franzen is the author of five novels, including The Corrections, Freedom, and Crossroads, and five works of nonfiction, most recently Farther Away and The End of the End of the Earth, all published by Farrar, Straus and Giroux. He lives in Santa Cruz, California.
Loading...
or
Not Currently Available for Direct Purchase