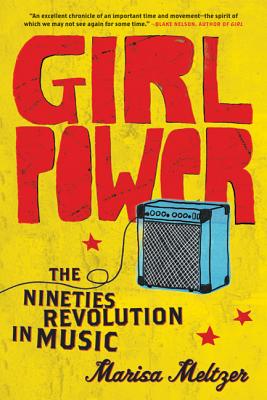 The Nineties Revolution in Music

In the early nineties, riot grrrl exploded onto the underground music scene, inspiring girls to pick up an instrument, create fanzines, and become politically active. Rejecting both traditional gender roles and their parents' brand of feminism, riot grrrls celebrated and deconstructed femininity. The media went into a titillated frenzy covering followers who wrote "slut" on their bodies, wore frilly dresses with combat boots, and talked openly about sexual politics.

The movement's message of "revolution girl-style now" soon filtered into the mainstream as "girl power," popularized by the Spice Girls and transformed into merchandising gold as shrunken T-shirts, lip glosses, and posable dolls. Though many criticized girl power as at best frivolous and at worst soulless and hypersexualized, Marisa Meltzer argues that it paved the way for today's generation of confident girls who are playing instruments and joining bands in record numbers.

Girl Power examines the role of women in rock since the riot grrrl revolution, weaving Meltzer's personal anecdotes with interviews with key players such as Tobi Vail from Bikini Kill and Amy Ray of the Indigo Girls. Chronicling the legacy of artists such as Bratmobile, Sleater-Kinney, Alanis Morissette, Britney Spears, and, yes, the Spice Girls, Girl Power points the way for the future of women in rock.


Praise For Girl Power: The Nineties Revolution in Music…

“There are probably at least a thousand ways to write about popular music, and the vast majority of them are fucking awful . . . All that makes it even more gratifying when a relatively new writer takes on pop music and does it flawlessly. Marisa Meltzer . . . manages to avoid every single music-writing pitfall in her fascinating new book, Girl Power: The Nineties Revolution in Music. It's a remarkably well-written book, and it doesn't seek to be comprehensive, indier-than-thou, or preachy --it's a brief history, written with a keen eye for both social and musical context, and it captures the spirit of popular music in the ‘90s better than anything I've read. . . I'm dying to see what she writes about next. Girl Power deserves an immediate place in the canon of popular music writing--Meltzer's accomplishment is remarkable, and her talent is undeniable.” —Michael Schaub, Bookslut

“We love Marisa Meltzer's Girl Power: The Nineties Revolution in Music, not only for its examination of music, feminism, and their subsequent catchphrases (‘Riot Grrrl,' ‘She-Rebels,' ‘Pop Tarts,' and ‘Girl Power!') but also for lines like this: "Music is often most important to you when you're really young or really pissed off. Luckily, in the nineties I was both.” —Elle

“Remember the time before the phrase girl power was more than just a ghettoizing, marketing tool to get tweens to buy stuff? Author (and NYLON contributor) Marisa Meltzer does, and she's written a damn good book about it. Girl Power: The Nineties Revolution in Music chronicles the trajectory of women in rock throughout that decade and beyond. Starting with the emergence of the groundbreaking, feminist riot grrrl movement, she examines how bands like Bikini Kill and Bratmobile fused a political, in-your-face ideology with angry punk songs that changed the industry landscape. From there, Meltzer offers smart analysis through the lens of third-wave feminism of lady musicians that followed--including Courtney Love, Liz Phair, and the Spice Girls, right up to the Britneys of the world. But for all the success of strong femmes like Beyoncé, Lady Gaga, and Rihanna today, Meltzer thinks we have a long way to go. ‘We're nowhere near ‘there.' Women have to rely on their looks just as much as their talent,' she says, adding that ‘all-girl bands are still going to have to address their gender as if it's a novelty.' But Meltzer remains optimistic. ‘I hope that with all the young girls learning drums and guitar at young ages, like at rock camps, this will change in the next generation.” —Stephanie Trong, NYLON

“A quick read at under 200 pages, Marisa Meltzer’s Girl Power serves as a great introduction to third-wave feminism’s development into a viable force within contemporary music. The book examines the permeation of the “girl power” brand of feminism into mainstream culture. Naturally it touches upon things such as riot grrrl and other bygone movements that scenesters today love to name drop. But to Meltzer’s credit, she resists the temptation to ferment in those street-cred scenes and instead expands her examination into the most pop-oriented, mainstream corners of music culture, thereby giving her book a comprehensive legitimacy.

Meltzer’s book should appeal beyond music aficionados to include those who are fascinated by the ways in which small nascent underground cultural concepts can persist and morph until they finally impact even the most benign and innocuous beginnings in the 1990s. The book is not mired in the heady academic concepts that may go over the head of a 13-year-old girl simply trying to understand the forces that shaped current tastes in fashion and music, yet still maintains enough sophistication and insight to engage a 30-year-old woman who actually lived through much of the subject matter. Taken as an introductory work, Girl Power is a useful springboard to examine feminism’s entry into first music and later nearly all aspects of today’s society.” —Under the Radar

“Meltzer's book should appeal beyond music aficionados to include those who are fascinated by the ways in which small nascent underground cultural concepts can persist and morph until they finally impact even the most benign and innocuous beginnings in the 1990s. The book is not mired in the heady academic concepts that may go over the head of a 13-year-old girl simply trying to understand the forces that shaped current tastes in fashion and music, yet still maintains enough sophistication and insight to engage a 30-year-old woman who actually lived through much of the subject matter. Taken as an introductory work, Girl Power is a useful springboard to examine feminism's entry into first music and later nearly all aspects of today's society.” —Under the Radar

“Writing from personal and journalistic perspectives, Meltzer packs plenty of solid information into this innovative popular history . . . Meltzer's in-depth research and interviews blend into a tightly woven yet flowing narrative as she offers incisive commentary on the culture, criticisms, and far-reaching impact of the riot grrrl and her music, with a special focus on the historical lineage of performers, from Bikini Kill to Alanis Morissette to the Spice Girls. VERDICT: Women who grew up during this time period and students of comparative feminist history, psychology, and modern musical genres will find this absorbing. It provides a personal frame of reference for those who lack their own but have an interest in the music and the era.” —Library Journal

“An excellent chronicle of an important time and movement--the spirit of which we may not see again for some time.” —Blake Nelson, author of Girl and Paranoid Park

“If it wasn't outright obvious at the time, it's become totally clear in hindsight that during the Nineties the girls were pretty much creaming the boys on the rock & roll playground. Marisa Meltzer's Girl Power chronicles that fascinating phase in pop history, expertly guiding us along the beguiling parabola that leads from riot grrrls and Liz Phair to the Spice Girls and Britney Spears. This book is a lot like the music it covers: provocative, whip-smart, and invigoratingly fun.” —Jeff Gordinier, author of X Saves the World and the editor-at-large of Details magazine

Marisa Meltzer is the coauthor of How Sassy Changed My Life (2007) and author of Girl Power (2010). Her work has appeared in The Wall Street Journal, Slate, Elle, and Teen Vogue. She attended Evergreen State College and lives in Brooklyn, New York.
Loading...
or support indie stores by buying on