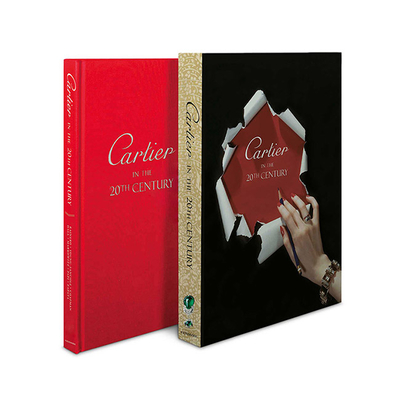 Cartier in the 20th Century

Created with the expertise of Cartier Heritage, this exquisite book showcases the rich holdings of the Cartier Collection and archive. It features not only a sumptuous array of rings, bracelets, necklaces, and tiaras, but also cocktail and smoking accessories, mystery clocks, and lavish objects created by Cartier’s ateliers in Paris, London, and New York. Organized thematically, the book features magnificent jewels and accessories owned by such arbiters of taste as Daisy Fellowes, the Duchess of Windsor, Princess Grace, Barbara Hutton, and Elizabeth Taylor. Throughout, specially commissioned photographs of Cartier’s legendary jewels are accompanied by vintage photographs—drawn from the Condé Nast and Cartier archives—of these royals, socialites, and Hollywood stars in their Cartier finery, including work by Steichen, Horst, Beaton, and Charbonneau.

Praise For Cartier in the 20th Century…

"Glamorous and droolworthy 272-page history organized by theme in text and photos, with archival shots of Elizabeth Taylor and various royalty. In a slip box from The Vendome Press, in association with the Denver Art Museum."
— The Associated Press

"For anyone who appreciates good, hardbound books, exquisite photography, heritage, and all that has to do with fashion culture, 'Cartier in the 20th Century' is an easy buy.”
— Selectism

"Cartier in the 20th Century is an elegantly produced, beautifully photographed volume, that is a must have for anyone interested in the history of luxury goods, the intersection of fashion, culture and the decorative arts or how one firm, with creativity and innovation not only survived but thrived throughout the last century."
— Quintessence

“We all know Cartier’s little red box holds one large surprise, but this time it’s not what you’d expect…Flipping through Cartier in the 20th Century takes you to a world like no other.”
— Worthy

"There are few accessories that evoke the feeling of Old Hollywood glamour quite like jewelry, and few designers that do the accessories as well as Cartier."
— InStyle.com

“The book's stylish slipcase is actually an adaptation of a VOGUE cover, c. 1942, photographed by Horst. . . . The book itself echo's Cartier's red signature gift box—so it's really quite possible to "give Cartier" for Christmas.”
— Little Augury

Pierre Rainero is director of Image, Style and Heritage at Cartier. Margaret Young-Sánchez is the Frederick and Jan Mayer Curator of Pre-Columbian Art at the Denver Art Museum. Martin Chapman is curator in charge of European decorative arts and sculpture at the Fine Arts Museums of San Francisco. Michael Hall is curator of the Rothschild collection at Exbury, Hampshire, England. Stefano Papi is former senior European specialist in the jewelry departments of both Sotheby’s and Christie’s. Janet Zapata is an independent scholar specializing in jewelry and silver.
Loading...
or
Not Currently Available for Direct Purchase