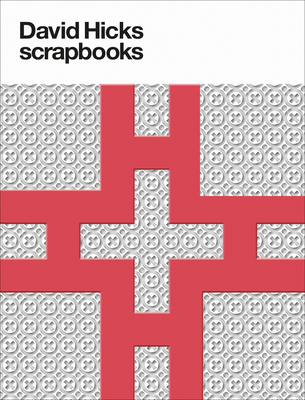 British designer David Hicks (1929–1998) wowed the English decorating world with his bold geometric prints, electrifying color combinations, and quirky mix of antique and contemporary furniture. Thanks to his prodigious talents, his gift for publicity, and his connection to the royal family through his wife, Lady Pamela Mountbatten (cousin of Prince Philip), Hicks attracted an A-list clientele. For decades, Hicks documented every salient moment of his life in scrapbooks, amassing 24 volumes filled with press clippings, invitations, swatches of his signature textiles, sketches of interiors, magazine articles on his projects, and hundreds of photographs, mainly family snapshots but also his own photos of people like Jackie Kennedy, Grace Kelly, and Andy Warhol. Many of the pages, now thumbed and foxed, are laid out in a collage style, and several are embellished with drawings and notes, revealing Hicks’s thoughts and sense of whimsy. Here, his son, Ashley Hicks, has chosen more than 325 of the best pages—providing not just a window into the extraordinary world of David Hicks but also a fascinating time capsule.

Ashley Hicks, an architect and interior designer, is the author of two books on his father. Since 2003 he has produced a line of fabrics, carpets, and wallpaper called David Hicks by Ashley Hicks.

"After Perusing David Hicks Scrapbooks, an overview of the legendary interior designer's pages of personal inspirations, you'll want to start your own."
— Domino

"Legendary British decorator David Hicks compiled 25 volumes of fastidiously executed scrapbooks before his death in 1998. Compiled here by his son, Ashley Hicks, they transcend both his personal and professional life."
— Architectural Digest

"Hicks's most recent venture, David Hicks Scrapbooks, is a distillation into one weighty tome of 25 volumes of cuttings, photographs, letters, swatches and memorabilia that David Hicks assembled and preserved."
— 1stdibs

"In David Hicks Scrapbooks, the London designer has skillfully selected 300 pages from his late father's stunning 25 volumes of scrapbooks. It's filled to the brim with Hicks's sketches of interiors, hundreds of photographs, fabric swatches, and umpteen assorted clippings."
— Architectural Digest

"David Hicks Scrapbooks is an incredible peak into an icon's process and accomplishments."
— House & Home
or
Not Currently Available for Direct Purchase
Copyright © 2020 American Booksellers Association