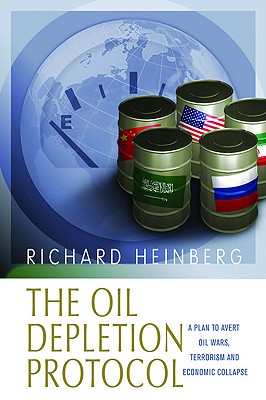 A Plan to Avert Oil Wars, Terrorism and Economic Collapse

Since oil is the primary fuel of global industrial civilization, its imminent depletion is a problem that will have a profound impact on every aspect of modern life. With-out international agreement on how to manage the decline of this vital resource, the world faces unprecedented risk of conflict and collapse.
"The Oil Depletion Protocol" describes a unique accord whereby nations would voluntarily reduce their oil production and oil imports according to a consistent, sen-sible formula. This would enable energy transition to be planned and supported over the long term, providing a context of stable energy prices and peaceful cooperation. The protocol will be presented at international gatherings, initiating the process of country-by-country negotiation and adoption and mobilizing public support. To this end, this book:
Provides an overview of the data concerning Peak Oil and its timing
Briefly explains the protocol and its implications for the reader and for
decision-makers in government and industry around the world
Deals with frequently asked questions and objections
Looks forward to how the protocol can be adopted and how municipalities and ordinary citizens can facilitate the process
Timely and critically important, "The Oil Depletion Protocol" is a must-read for policymakers and for all who seek to avert a Peak Oil collapse.

Richard Heinberg is widely acknowledged as one of the world's foremost Peak Oil educators. A journalist, educator, editor, lecturer, and a Core Faculty member of New College of California where he teaches a program on "Culture, Ecology and Sustainable Community, he is the author of six previous books including "The Party's Over" and "Powerdown." The 'father' of Peak Oil theory.
Loading...
or
Not Currently Available for Direct Purchase