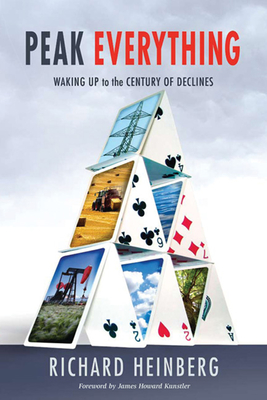 Waking Up to the Century of Declines

Transitioning gracefully from the Age of Excess to the Era of Modesty.

The 20th century saw unprecedented growth in population, energy consumption and food production. As the population shifted from rural to urban, human impacts on the environment increased dramatically.

The 21st century ushered in an era of declines, including:

To adapt to this profoundly different world, we must begin now to make radical changes to our attitudes, behaviors and expectations.

Now in paperback and featuring a foreword by James Howard Kunstler, Peak Everything addresses many of the cultural, psychological and practical changes we will have to make as nature dictates our new limits. This landmark work from Richard Heinberg, author of three of the most important books on Peak Oil, touches on vital aspects of the human condition at this unique moment in time.

A combination of wry commentary and sober forecasting on subjects as diverse as farming and industrial design, this book describes how to make the transition from The Age of Excess to the Era of Modesty with grace and satisfaction, while preserving the best of our collective achievements. Peak Everything is a must-read for individuals, business leaders and policy makers serious about effecting real change.

RICHARD HEINBERG is the author of seven previous books including The Party's Over: Oil, War and the Fate of Industrial Societies (New Society, 2003, 2005), Powerdown: Options and Actions for a Post-Carbon World (New Society, 2004), and The Oil Depletion Protocol (New Society, 2006). He is an educator, editor, lecturer, a Core Faculty member of new College of California's Campus for Sustainable Living, and a Fellow of the Post Carbon Institute. He is widely regarded as one of the world's foremost Peak Oil educators. He has also authored scores of essays and articles, which have appeared in journals such as The American Prospect , Quarterly Review , Public Policy Research , Resurgence , The Futurist , European Business Review , Earth Island Journal ; and on web sites such as GlobalPublicMedia.com , Alternet.org , EnergyBulletin.net , ProjectCensored.com , and Counterpunch.com . In 2005, Powerdown received ForeWord magazine's Bronze Environmental Award. In 2007, The Oil Depletion Protocol won ForeWord's Gold Environmental Award as well as the Independent Publishers Book of the Year (IPPY) Bronze Award in the category of Current Events. His books have been translated into eight languages. Since 2002, he has given over three hundred lectures on oil depletion (Peak Oil) to a wide variety of audiences, including members of the European Parliament. He is the recipient of the M. King Hubbert Award for Excellence in Energy Education (2006). Heinberg appears prominently in the documentary films 11th Hour (produced and narrated by Leonardo diCaprio, 2007); Asleep in America (2007); The History Channel's Megadisasters series, episode on Peak Oil (2007); What a Way to Go: Life at the End of Empire (2007); Escape from Suburbia (2007); Crude Impact (2006); the nationally televised PBS documentary Ripe for Change (2006); The Power of Community: How Cuba Survived Peak Oil (2006); and The End of Suburbia (2004). He is currently working with Discovery Channel on the upcoming sustainability series, Final Hour .
Loading...
or support indie stores by buying on