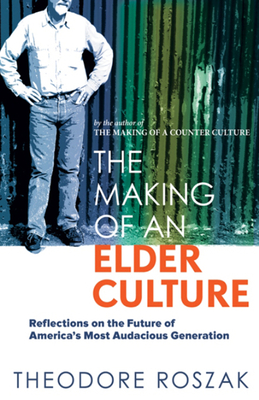 The Making of an Elder Culture

Reflections on the Future of America's Most Audacious Generation

Forty years later, the audacious generation takes on the unfinished business of their counter-culture youth.

It is a brilliant and highly original thesis. I commend Roszak for writing the book.
-- Tom Pochari, World Affairs Monthly

...sense of optimisim that comes out in this book, where Roszak champions the possibility of restoring that lost commitment to the ideals of libertion .
-- Tom Hartley

The Summer of Love. Vietnam. Woodstock. These are the milestones of the baby boomer generation Theodore Roszak chronicled in his 1969 breakthrough book The Making of a Counter Culture . Part of an unprecedented longevity revolution, those boomers form the most educated, most socially conscientious, politically savvy older generation the world has ever seen. And they are preparing for Act Two.

The Making of an Elder Culture reminds the boomers of the creative role they once played in our society and of the moral and intellectual resources they have to draw upon for radical transformation in their later years. Seeing the experience of aging as a revolution in consciousness, it predicts an "elder insurgency" where boomers return to take up what they left undone in their youth. Freed from competitive individualism, military-industrial bravado, and the careerist rat race, who better to forge a compassionate economy? Who better positioned not only to demand Social Security and Medicare for themselves, but to champion "Entitlements for Everyone"? Fusing the green, the gray, and the just, Eldertown can be an achievable, truly sustainable future.

Part demographic study, part history, part critique, and part appeal, Theodore Roszak's take on the imminent transformation of our world is as wise as it is inspired--and utterly appealing.

Theodore Roszak is the author of fifteen books, including the 1969 classic The Making of a Counter Culture . He is professor emeritus of history at California State University, and lives in Berkeley, California.

Theodore Roszak is the author of 15 books, including the 1969 classic, The Making of a Counter Culture . He was educated at UCLA and Princeton and is professor emeritus of history at State University of California - East Bay. Theodore lives in Berkeley, California.
Loading...
or
Not Currently Available for Direct Purchase