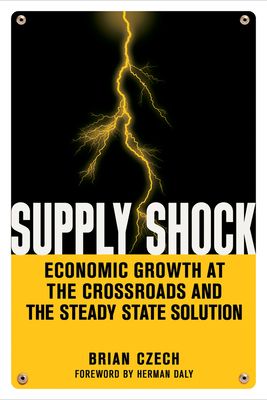 Economic Growth at the Crossroads and the Steady State Solution

Politicians, economists, and Wall Street would have us believe that limitless economic expansion is the Holy Grail, and that there is no conflict between growing the economy and protecting the environment. Supply Shock debunks these widely accepted myths and demonstrates that we are in fact navigating the end of the era of economic growth, and that the only sustainable alternative is the development of a steady state economy.

Starting with a refreshingly accessible, comprehensive critique of economic growth, the author engages readers in an enormous topic that affects everyone in every country. Publishers Weekly favorably compared Brian Czech to Carl Sagan for popularizing their difficult subjects; Supply Shock shows why.

Czech presents a compelling alternative to growth based on keen scientific, economic, and political insights including:

Supply Shock leaves no doubt that the biggest idea of the twentieth century--economic growth--has become the biggest problem of the twenty-first. Required reading for anyone concerned about the world our children and grandchildren will inherit, this landmark work lays a solid foundation for a new economic model, perhaps in time for preventing global catastrophes; certainly in time for lessening the damages.

Brian Czech is the founder of Center for the Advancement of the Steady State Economy (CASSE), the leading organization promoting the transition from unsustainable growth to a new economic paradigm.

Brian Czech is the founder of Center for the Advancement of the Steady State Economy (CASSE), the leading organization promoting the transition from unsustainable growth to a new economic paradigm. CASSE was named the Best Green Think Tank of 2011 by Treehugger. Brian's background is in ecology, conservation biology, and economics, and together with colleagues from several professional scientific societies, he crafted a position statement on economic growth that has been signed by nearly 10,000 individuals and endorsed by hundreds of progressive organizations. Herman Daly was a senior economist with the World Bank in the 1980's and 90's. He has served on the boards of directors of numerous environmental organizations, and is a cofounder and associate editor of the journal Ecological Economics. He is the author of many articles about economic development as it relates to population, resources and the environment, as well as numerous books, including Toward a Steady-State Economy, Beyond Growth, and Steady-State Economics.
Loading...
or
Not Currently Available for Direct Purchase