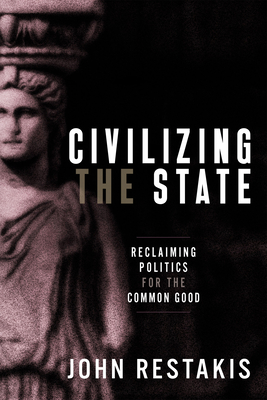 Reclaiming Politics for the Common Good

The liberal state is dead, long live the partner state

Across the world, the liberal nation state is on its knees. Rising inequality, deep political polarization, and the pervasive power of corporations are tearing apart the social contract and threatening to crush democracy.

Civilizing the State traces the history and development of the liberal state and its changing role from the enabler of capitalism to protector of citizen welfare, to its hollowing out and capture by corporate and elite interests rendering it unfit to address the compounding crises of inequality, injustice, ecological collapse, and loss of legitimacy.

Author John Restakis explores citizen-powered alternatives and experiments in co-operation, deep democracy, solidarity economics, and commoning from Spain, India, the global peasant movement, and the emerging stateless democracy of Rojava rising from the wreckage of the Syrian civil war.

The final section views the current crisis as an opportunity to reimagine the state not as handmaid to predatory elites but as a partner state that promotes equity, economic democracy, co-operation, and human thriving, driven by deep democracy and a fully sovereign civil society.

Incisive, penetrating, and inspirational, this is essential reading for all engaged citizens with a stake in co-creating a better future for all.

John Restakis has been active in the co-op movement for 25 years. He is the former Executive Director of Community Evolution Foundation and the BC Co-operative Association. John is Co-founder of Synergia Co-operative Institute. A practitioner and pioneering researcher into international co-operative economies, he writes and lectures on economic democracy and the role of co-operatives in humanizing economies. He is the author of Humanizing the Economy: Co-operatives in the Age of Capital and lives in Vancouver, BC.
Loading...
or support indie stores by buying on