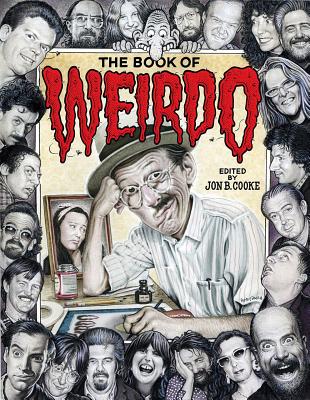 The Book of Weirdo

The Book of Weirdo is the definitive (as well as hugely entertaining) examination of Weirdo magazine, renowned underground comix cartoonist Robert Crumb's legendary humor comics anthology from the 1980s. Crumb himself has called the retrospective "a great book" and "the definitive work on the subject."

A low-brow counterpoint to Art Spiegelman and Francoise Mouly's rather high-falootin' RAW, Weirdo influenced an entire generation of cartoonists, and served as a creative refuge for underground comix veterans and training ground for new creators, and this book features the comprehensive story of the fondly-recalled magazine, along with testimonials from over 130 of the mag's contributors, plus interviews with Weirdo's three editors ― R. "Keep on Truckin'" Crumb, Peter "Hate" Bagge, and Aline "The Bunch" Kominsky-Crumb ― as well as publisher "Baba Ron" Turner.

This 288-page hardcover book is as much a comprehensive history of the alternative comics scene of the 1980s and early '90s ― from New York City punk to Seattle grunge ― as it is the story of a single magazine, an exhaustive retrospective that includes rare and unseen artwork from that era, as well as new comics from modern-day artists paying homage to the great oddball mag. In its time, the periodical featured the finest work of many artists, particularly the best material by R. Crumb himself, Weirdo's founder and best known for ZAP Comix, Fritz the Cat, and Mr. Natural, and a man widely heralded as the greatest cartoonist of all time.

In 1981, amidst a seismic shift to the right in the country, Crumb responded by unleashing the savagely irreverent and satirical Weirdo onto the great multitude, and he generously welcomed to its pages not just his ZAP Comix underground cohorts, but also an entirely new generation of iconoclastic cartoonists. It was an irreverent, outrageous, often politically-incorrect, and taboo-challenging anthology that showcased Crumb's finest ― and most controversial ― material. It was gut-busting, hysterical, and frequently offensive. But, most of all, it was FUNNY Though it finally gave up the ghost by 1993, in its time, Weirdo was one of the very best of its kind... a showcase for outsiders, freaks, and (naturally) weirdos. In fact, truth to tell, it's the ONLY one of its kind.