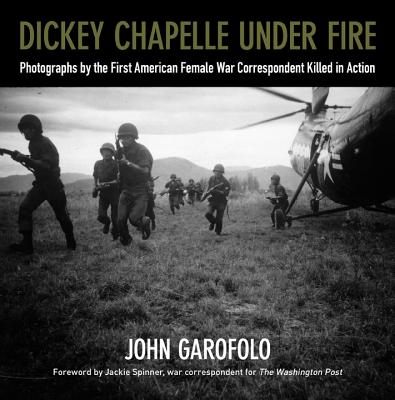 "It was dawn before I fell asleep, and later in the morning I was only half-awake as I fed a fresh sheet of paper into the typewriter and began to copy the notes from the previous day out of my book. But I wasn't too weary to type the date line firmly as if I'd been writing date lines all my life:
from the front at iwo jima march 5--
Then I remembered and added two words.
under fire--
They looked great."
In 1965, Wisconsin native Georgette "Dickey" Chapelle became the first female American war correspondent to be killed in action. Now, "Dickey Chapelle Under Fire" shares her remarkable story and offers readers the chance to experience Dickey's wide-ranging photography, including several photographs taken during her final patrol in Vietnam.
Dickey Chapelle fought to be taken seriously as a war correspondent and broke down gender barriers for future generations of female journalists. She embedded herself with military units on front lines around the globe, including Iwo Jima and Okinawa, the Dominican Republic, and Vietnam. Dickey sometimes risked her life to tell the story--after smuggling aid to refugees fleeing Hungary, she spent almost two months in a Hungarian prison. For twenty-five years, Dickey's photographs graced the pages of "National Geographic," the "National Observer," "Life," and others. Her tenacity, courage, and compassion shine through in her work, highlighting the human impact of war while telling the bigger story beyond the battlefield.
In "Dickey Chapelle Under Fire," the American public can see the world through Dickey's lens for the first time in almost fifty years, with a foreword by Jackie Spinner, former war correspondent for "The Washington Post."

John Garofolo is a former entertainment industry executive and veteran of Operation Iraqi Freedom. A commander in the US Coast Guard Reserve, he has more than twenty-five years of active and reserve military service and taught at the Coast Guard Academy. Thanks to a grant from the Brico Fund through the Milwaukee Press Endowment, he has written a stage adaptation of Dickey Chapelle's life. John earned a PhD from the University of Southern California School of Cinematic Arts and lives with his wife and daughter in Southern California.

Publisher's Weekly Starred Review-
Garofolo, an Iraq War veteran and former entertainment industry executive, assembles the first-ever collection of the work of Georgette "Dickey" Chappelle, who pursued a photojournalism career at a time when practically no women did, beginning in WWII. The Wisconsin native's love of aviation and photography led her to abandon her studies at MIT and hang around military bases instead. She flunked out, married, and persuaded the Navy—despite her Navy husband's objections—to let her cover the front lines in the Pacific. Chapelle eagerly went on to cover events in Hungary, Algeria, Cuba, Lebanon, the Dominican Republic, and, fatefully, Vietnam. Despite winning awards for her work, she struggled for assignments; when she got them, she earned less pay than her male counterparts. Her arresting black and white photos capture lasting scenes: grotesquely wounded soldiers, children caught in conflict, and summary executions of combatants. But it's a colleague's photo that haunts this book: the 47-year-old Chapelle laying mortally wounded after being hit by shrapnel while on patrol with Marines in South Vietnam. The commandant of the Marine Corps called Chapelle "one of us," and her body of work surely deserves the wider recognition this book provides. 153 b&w photos. (Publisher's Weekly Starred review, Sept. 2015)

John Garofolo's work is not only a fine read, it is a must for any who have experienced combat, especially those of us who continue to tell the Marine Corps story. (Capt Jack T. Paxton, USMC (Ret,) Leatherneck Magazine, November 2015)

Dickey Chapelle Under Fire  is a moving important legacy to Dickey Chapelle as well as the many men and woman who run head first into harm's way in order to protect those present, left behind, as well as humanity as a whole. For that I believe it should be included in all Library, Historical and Art History Collections as a record of the First American Female Correspondent Killed in Action, her work, and the unsettling history of the time. (Karen Chutsky, Chutsky's Bookshelf, Midwest Book Review, February 2016)

Chapelle’s courage and unflagging determination are an example for all, and, thankfully, John Garofolo’s Dickey Chapelle Under Fire brings her little-known story and work into the light. Garofolo has studied her work for over 20 years, and this book is a wonderful (and needed) step in recognizing Chapelle’s contribution to photojournalism. (Jenny Montgomery, PhotoLife, March 8, 2016)