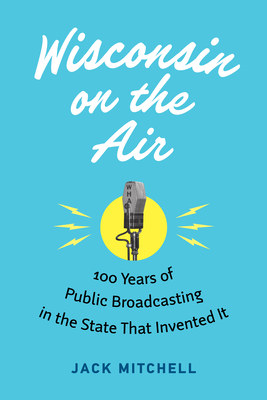 Wisconsin on the Air

100 Years of Public Broadcasting in the State That Invented It

On a wintry evening in 1917, university professor Earle Terry listened with guests as the popular music of the day filtered from a physics laboratory in Science Hall into a receiving set in his living room. Little did they know that one hundred years of public service broadcasting had just begun. Terry’s radio experiment blossomed into a pioneering endeavor to carry out the "Wisconsin Idea," a promise to make the university’s knowledge accessible to all Wisconsinites, in their homes, statewide, a Progressive-era principle that still guides public broadcasting in Wisconsin and throughout the nation. In 1947, television was added to this public service model with Channel 21 in Madison, produced, like radio, from the University of Wisconsin campus. By 1967, when the Public Broadcasting Act created the Public Broadcasting System (PBS) and National Public Radio (NPR), the Wisconsin stations had been broadcasting for fifty years. A history one hundred years in the making, Wisconsin on the Air introduces readers to the personalities and philosophies, the funding challenges and legislation, the original Wisconsin programming and pioneering technology that gave us public radio and television. Author Jack Mitchell, who developed All Things Considered for NPR before becoming the head of Wisconsin Public Radio, deftly maps public broadcasting’s hundred-year journey by charting Wisconsin’s transition from the early days of radio and television to educational broadcasting to the news, information, and music of Wisconsin Public Radio and Wisconsin Public Television.

Jack Mitchell, PhD, led Wisconsin Public Radio from 1976 till 1997, initiating the transition from educational radio to WPR. Mitchell was the first employee of National Public Radio, where he was instrumental in developing the groundbreaking newsmagazine All Things Considered. He received the two highest honors in public radio, the Corporation for Public Broadcasting’s Edward R. Murrow Award and the Edward Elson National Public Radio Distinguished Service Award. Mitchell joined the faculty of the UW–Madison School of Journalism and Mass Communication in 1998. He is the author of Listener Supported: The Culture and History of Public Radio.
Loading...
or
Not Currently Available for Direct Purchase