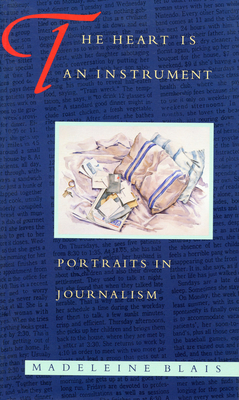 The Heart Is an Instrument

From the foreword by Geneva Overholser.

What is it about really fine writers, how they delight, intrigue, compel us?

Style, you say. But style is not something you begin with. Rather, it's what you end up with, a result of far more fundamental traits. Traits such as an ear and an eye and a heart, traits that Madeliene Blais has honed superbly well.

This is a book well named: The Heart Is an Instrument: Portraits in Journalism. The heart is surely first among Blais's gifts. Whether she is writing about the famous--playwright tennessee Williams, novelist Mary Gordon--or about the least elevated among us--a teenage prostitute infected with the AIDS virus, a homeless schizophrenic--she brings to her subjects an incomparable empathy.

Praise For The Heart Is an Instrument: Portraits in Journalism…

"From her portrayal of society's discards to her reporting on the famous, Pulitzer Prize-winning journalist Blais writes stories that are alive and captivating. Readers are drawn into the lives of a fascinating assortment of people in the 15 feature articles reprinted in this book. The vivid portrait of Christine Falling, the baby killer, with her fractured language and worldviews stands next to a sketch of 68-year-old Tennessee Williams as he nears the end of a life devoted to literature. Blais writes beautifully, telling stories that illustrate the drama and importance of each life. The reader will care about these people. Blais includes a brief epilog for each chapter and concludes with a final autobiographical essay that offers advice to aspiring journalists. This book, however, deserves a wider audience than students. While it belongs in academic journalism collections, it should also be considered for public library collections."—Library Journal

"Fifteen brief but sensitive vignettes and a longer epilogue by Blais (Journalism/Univ. of Mass. at Amherst), a Pulitzer-winning former writer for the Miami Herald. Blais focuses primarily on 'outsider'--a schizophrenic woman struggling to gain stability, a teenaged murderer, an 83-year-old WW I vet seeking to have his dishonorable discharge reversed. One of the most successful pieces here, reprinted from The Washington Post, concerns Carol Fennelly, a social activist who continues to head a shelter for the homeless even though her fellow activist and longtime lover Mitch hanged himself. Blais captures in haunting images the woman's strength, her sense of loss, her vulnerability: Fennelly, Blais tells us, speaks of an earlier marriage in which her husband asked, 'Why can't you be more obedient?' 'Dogs are obedient!' Fennelly replied, dropping to all fours and barking and tugging at his pants cuff with her teeth. But when Blais depicts a subject who is 'successful,' as, for example, in a portrait of an anonymous $80-an-hour therapist whose life is a manic attempt to juggle career and motherhood, her plans misfire. Rather than seeing the woman as admirable, as Blais apparently intends, we perceive her as self-absorbed and misdirected; in fact, the author admits in an afterword that this particular article elicited a nearly universal negative response when it appeared. Nor is Blais much more successful in her interview with Tennessee Williams, offering little more than a rehash of the playwright's oft-told tales. Discussing her own work, Blais writes, 'I am most often drawn to people walking the edge, curiously undefeated.' It's in portraying these marginal lives that she's most effective."—Kirkus

"Blais is one of the great treasures of journalism. This book tells why. Her writing is beautiful with infinite range. She can be poignant. She can be whimsical. She can be tough. And throughout it all, she has an eye as sharp and incisive as a needle. What an exquisite collection!"—H. G. Bissinger III, author of Friday Night Lights

"These portraits are fascinating reading. Blais's storytelling instincts and techniques are superb. She knows how to weave in those seemingly insignificant details that reveal so much. Her ability to evoke character is remarkable. I enjoyed reading every piece."—Nancy Roberts

Madeleine Blais is professor of journalism at the University of Massachusetts. In 1980, while on the staff of the Miami Herald, she won a Pulitzer Prize for feature writing. Her latest book is In These Girls Hope Is a Muscle.
Loading...
or support indie stores by buying on