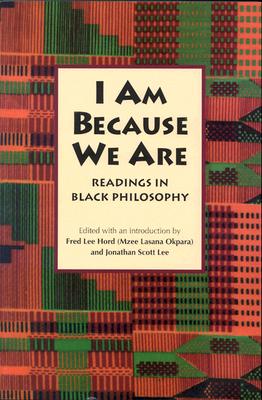 I Am Because We Are

This anthology of writings by prominent black thinkers from antiquity to the present makes the case for a central tradition of black philosophy, rooted in Africa and distinct from the intellectual heritage of the West. The work is divided geographically, and to some extent historically, into three parts--Africa, the Caribbean, and North America. Readings range from the Egyptian Teachings of Ptahhotep to essays on negritude by Leopold Sedar Senghor and Wole Soyinka to proposals for the transformation of Western ideas and values by bell hooks, Cornel West, and Molefi Kete Asante.

The editors argue that despite their remarkable diversity of origin, style, and method, these writings constitute a tradition because they share a fundamental philosophical preoccupation with the meaning of individual life in community. It is a tradition that foregrounds social and ethical issues and sees the philosopher as mediator--between individual and society, between colonizer and colonized, and between different cultures.

Fred Lee Hord (Mzee Lasana Okpara) is professor of English and director of black studies at Knox College. Jonathan Scott Lee is professor of philosophy at Colorado College and author of Jacques Lacan, published by the University of Massachusetts Press.
or
Not Currently Available for Direct Purchase