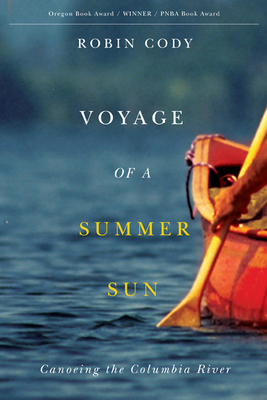 Voyage of a Summer Sun

“The story is the Columbia River, not the canoe and me, but I’ve learned that friends can’t hear me tell about the river until they know why I was out there. This is not an adventure story, though some adventure was unavoidable, and I didn’t set out to find myself if I could help it. Nor did I launch the trip with a large point to prove. It was a voyage of discovery, and its telling is the uncovering of surprise on a river I thought I knew…” —Robin Cody, from the prologue

On a June morning in 1990, high up in the Canadian Rockies, Robin Cody pushed his sixteen-foot Kevlar canoe through tall grass and mud to launch it on peaceful Columbia Lake, the nominal source of the river that heaves more water into the Pacific ocean than any other in North or South America. For the next eighty-two days, Cody would portage massive dams and revel in the rapids as the great river plunges 2,700 feet in 1,200 miles before reaching the river’s mouth in Astoria.

Cody’s canoe sneaks up on the bear and moose and raptors and beavers who make a living on the Columbia. He drops in on riverpeople: the trapper, the wind surfer, the archeologist, the lock operator, the native woman who grew up at riverside in a dwelling of tule reeds. With a generous and infectious spirit, Cody draws us into the mysteries of a much-altered and regulated river that is still, at heart, a life-giving place.

This first OSU Press edition of Voyage of a Summer Sun—winner of the Pacific Northwest Booksellers Association Book Award and the Oregon Book Award, and an Oregon State Library choice for “150 Books for the Oregon Sesquicentennial”—includes a new afterword by the author.

Praise For Voyage of a Summer Sun: Canoeing the Columbia River…

“A spellbinding journey into the heart and soul of the West… Humorous, meditative, powerful, this work holds the reader like a magical eddy.” –Craig Lesley, author of The Sky Fisherman

“The book Huck Finn might have written if he’d had the chance to canoe the Columbia River instead of rafting the Mississippi…” –William Wharton, author of Birdy

Oregon native Robin Cody is the author of Ricochet River, which also appears on the Oregon State Library’s “150 Oregon Books for the Oregon Sesquicentennial” list, and Another Way the River Has. He lives in Portland.