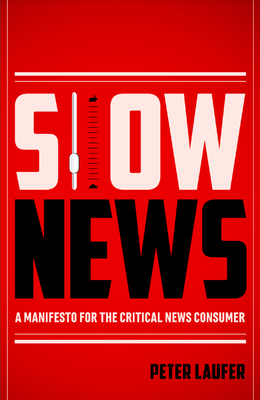 A Manifesto for the Critical News Consumer

With this provocative and concise book, journalist Peter Laufer launches a Slow News movement, inviting us to question the value of the perpetual empty-calorie news that accompanies our daily lives.

Slow News: A Manifesto for the Critical News Consumer examines the nature of news in the context of the increasingly frenetic pace of modern life in the twenty-first century. Taking a cue from the slow food movement, Laufer suggests that we step back from the constant barrage of instant news to consider news thoughtfully and thoroughly. He argues that it is valuable for both the journalist in the field and the news consumer at home to take the time to ruminate on most news events.

Praise For Slow News: A Manifesto for the Critical News Consumer…

"Emphasizing the core values of freedom of speech, the book simply defines news as ‘anything that changes the status quo.’ It is this elegant writing that makes Laufer’s book required reading.” —John Pavlic, journalism professor, Rutgers University


“The book is a must read for everybody who wants to understand how the media are working and why it has become so difficult to stay informed without wasting time.” —Stephan Russ-Mohl, media critic and journalism professor, University of Switzerland (Lugano)

An award-winning author, journalist, broadcaster, and documentarian, Peter Laufer has written more than a dozen books, including Mission Rejected: U.S. Soldiers Who Say No to Iraq, Forbidden Creatures: Inside the World of Animal Smuggling, and The Dangerous World of Butterflies. He reported for NBC and CBS radio around the world, and wrote and produced several documentaries as an NBC news correspondent, winning the George Polk Award for his study of Americans incarcerated overseas. He is the James Wallace Chair in the School of Journalism and Communications at the University of Oregon in Eugene.
Loading...
or
Not Currently Available for Direct Purchase