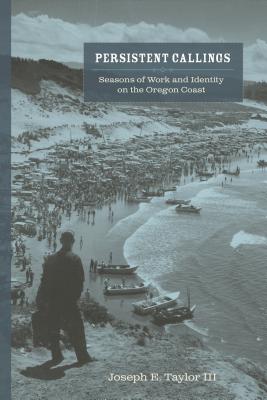 Seasons of Work and Identity on the Oregon Coast

The Nestucca Valley is a small watershed, tucked away in one corner of a county in far western Oregon. There are no incorporated towns, and cows outnumber humans. It has long been a place without a written history, yet its past offers many surprising twists on received wisdom about rural economies. In crisp prose and succinct chapters, Persistent Callings carries readers from aboriginal times to the present, illustrating the wisdom of seasonal labor, the complex relationships between work and identity, and the resilience of rural economics across more than a century of almost continual change.

Life in this watershed, known to locals as “South County,” has always been demanding. Farming, fishing, and logging were difficult occupations, but work had deeper meanings. Challenges arrived in many forms, including climate shifts, market crashes, regulatory changes, and industry consolidations. Residents’ ability to innovate was their greatest resource, and their persistence helps us to recognize the callings they pursued.

During the late twentieth and early twenty-first centuries, disruptions came more quickly, and they coincided with infusions of capital that dramatically altered the structure of employment, with devastating results for the valley’s hardest working residents. Unemployment and poverty skyrocketed while health and life expectancy dropped to alarming levels. Moreover, the arrival of retirees and rise of environmental amenities actually exacerbated some ecological problems. Little in this history plays out as expected, and much of it will make readers reconsider how they think about the social, economic, and environmental contours of rural life in the American West.

Joseph E. Taylor III is a professor of history and geography at Simon Fraser University. He earned his degrees at the University of Oregon and University of Washington, and his research investigates the intersection of social and ecological systems in the fisheries, outdoor recreation, gentrification, conservation, and politics of the North American West. He is the author of Making Salmon: An Environmental History of the Northwest Fisheries Crisis, Pilgrims of the Vertical: Yosemite Rock Climbers and Nature at Risk, and Follow the Money: A Spatial History of In-Lieu Programs for Western Federal Lands.
Loading...
or
Not Currently Available for Direct Purchase