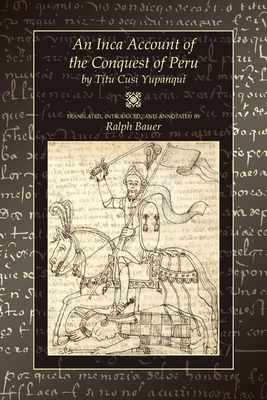 An Inca Account of the Conquest of Peru (Paperback)

Available in English for the first time, An Inca Account of the Conquest of Peru is a firsthand account of the Spanish invasion, narrated in 1570 by Diego de Castro Titu Cusi Yupanqui - the penultimate ruler of the Inca dynasty - to a Spanish missionary and transcribed by a mestizo assistant. The resulting hybrid document offers an Inca perspective on the Spanish conquest of Peru, filtered through the monk and his scribe.

Titu Cusi tells of his father's maltreatment at the hands of the conquerors; his father's ensuing military campaigns, withdrawal, and murder; and his own succession as ruler. Although he continued to resist Spanish attempts at "pacification," Titu Cusi entertained Spanish missionaries, converted to Christianity, and then, most importantly, narrated his story of the conquest to enlighten Emperor Phillip II about the behavior of the emperor's subjects in Peru. This vivid narrative illuminates the Incan view of the Spanish invaders and offers an important account of indigenous resistance, accommodation, change, and survival in the face of the European conquest.

Informed by literary, historical, and anthropological scholarship, Bauer's introduction points out the hybrid elements of Titu Cusi's account, revealing how it merges native Andean and Spanish rhetorical and cultural practices. Supported in part by the Colorado Endowment for the Humanities.

Ralph Bauer is an associate professor of English at the University of Maryland, College Park, and the author of The Cultural Geography of Colonial American Literatures.

Praise For An Inca Account of the Conquest of Peru…

"This unique document, which provides a rare indigenous vision of the Spanish conquest of Peru and its aftermath, is now available in English thanks to the scholarly work of Ralph Bauer. . . . Bauer's scholarship, and his mastery of the topic, is reflected in the fine translation as well as in the extensive introduction and substantial set of footnotes. The translation is not only highly accurate, but also modernized in a way that will make the account easily accessible to specialists, students of Latin American history, as well as the general public interested in the Incas. The introduction provides information on the specific social conditions under which the document was written and insights into the historical personages mentioned in the text. . . . The value of the publication is further increased with the addition of a glossary, a well-developed index, and an appealing overall book design. This publication is a pleasure to the eye as well as to the mind."
—Journal of Anthropological Research

"Bauer's annotated translation of the account provided by Titu Cusi (1538-1570) to defend his claim to royal Inca descent and to justify his opposition to the Spanish invaders makes available for the first time in English a full-length and highly accessible version of this important document. The account will help students and teachers of Latin American history and historians in general better understand the complex and incomplete process of the Spanish Conquest in Peru. Titu Cusi's text and Bauer's ample introduction confront readers with the significant divisions, competing factions, and surprising alliances that appeared among both Inca nobles and Spanish invaders as they battled for power and wealth in the Andes."
—The Americas

"This translation, available for the first time in its entirety, takes a critical look at how the Incan society challenged the Spanish conquest."
—Colorado Endowment for the Humanities 2005 Publication Prize Committee
or support indie stores by buying on
Copyright © 2020 American Booksellers Association