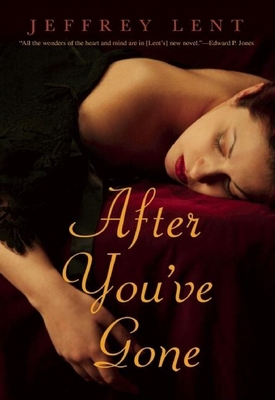 “Henry Dorn loses his wife and grown son in an accident in 1921 and, a year later, embarks for Amsterdam, where he meets the young and entrancing Lydia Pearce. In After You've Gone, the language is clean and precise with not a word wasted, the characters well drawn and interesting, and the plot just complex enough to keep the reader enthralled. In short, a very fine novel.”
— Penny McConnel, Norwich Bookstore, Norwich, VT
View the List

In After You've Gone, a historical novel set in Nova Scotia, New York, and Amsterdam, Jeffrey Lent beautifully charts the sweep of a life and the discovery--and loss--of life-defining love. Henry Dorn has spent years building a family, but it only takes a single afternoon for it to fall apart. The woman with whom he fell in love in the first blush of youth, who has been his perfect mate through a lively young marriage ripened by the raising of three children, has been lost. The car wreck that killed her also took their son Robert, a veteran of the Great War whose bitterness and addiction to morphine had slowly been driving him and Henry apart. Restless, broken, questing but unsure for what, Henry buys a steamer ticket for Amsterdam, planning to research his family history and start life anew. But nothing could have prepared him for the young woman he meets on the ship: the fiery, self-sufficient Lydia Pearce, one of a new generation of women. At first Henry does not know what to make of Lydia but, before long, they have fallen into an affair of a depth and significance for which neither was prepared. And just as quickly as he was robbed of Olivia, Henry is faced with the gift of new possibilities--and the need to reconcile them with those already lost. From a hardscrabble Nova Scotia fishing town, to a women's college in New York, to a 1920s Europe alive with the unbuttoning of sexuality but scarred by war, After You've Gone is a gorgeous tale spanning several pivotal decades in American life, and an unforgettable portrait of one man and the extraordinary women he loved.

Praise For After You've Gone…

“All the wonders of the heart and mind are in [Lent's] new novel. With unequalled skill and sensitivity, Jeffrey Lent offers us a profound understanding of the how and why we get through our good days and our bad days.”—Edward P. Jones, author of The Known World

“I had a curious and fascinating experience with Jeffrey Lent’s After You’ve Gone. I read it three months ago and then let it slip in and out of my consciousness without beckoning it. Like all good novels, After You’ve Gone will become part of your life. The triumph is the quality of Lent’s prose.”—Jim Harrison