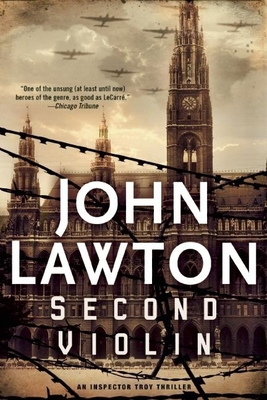 John Lawton adds another spellbinding thriller to his Inspector Troy series with Second Violin. The sixth installment in the series, Lawton's novel opens in 1938 with Europe on the brink of war. In London, Frederick Troy, newly promoted to the prestigious Murder Squad at Scotland Yard, is put in charge of rounding up a list of German and Italian "enemy aliens" that also includes Frederick's brother, Rod, who learns upon receiving an internment letter that despite having grown up in England he is Austrian-born. Hundreds of men are herded by train to a neglected camp on the Isle of Man. And, as the bombs start falling on London, a murdered rabbi is found, then another, and another. Amidst great war, murder is what matters. Moving from the Nazi-infested alleys of pre-war Vienna to the bombed out streets of 1940 London, and featuring an extraordinary cast of characters, Lawton's latest brings to life war-torn London. In this uncommon thriller, John Lawton delivers a suspenseful and intelligent novel, as a good a spy story as it is an historical narrative.

“One of the joys of reviewing crime fiction is that now and then one comes across . . . an author whose writing sets pulses racing and the jaded responses tingling. . . I entreat you, dear reader, to search out John Lawton and cherish him to your bosom, for he is truly an original.” —Irish Times

“Smart and gracefully written . . . It has been Lawton’s achievement to capture, in first-rate popular fiction, the courage and drama—and the widespread tomorrow-we-maydie exuberance—of that terrible and thrilling moment in twentieth-century history.” —Patrick Anderson, The Washington Post