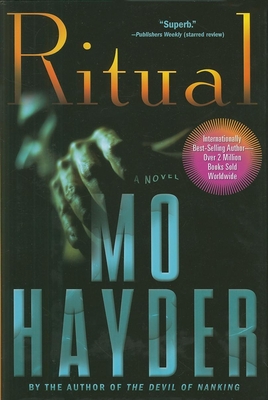 “The queen of funky thrillers has done it again, as a female English police diver named Flea discovers a severed hand, leading us into the world of black market African superstitions and rituals in Bristol, England. Mo Hayder's weird, she's wild, and I love her!”
— Jerry Kannel, Harry W. Schwartz Bookshop, Brookfield, WI
View the List

Mo Hayder's previous novels The Devil of Nanking and The Treatment have ranked her among the most exciting and provocative thriller writers now working. In her latest, Ritual, Hayder gives us a taut, chilling tale of clandestine occult practices, New Age medicine, and the drug underground, set in a hypermodern urban landscape challenged by colliding immigrant cultures.
Just after lunch on a Tuesday in April, nine feet under water, police diver Flea Marley closes her gloved fingers around a human hand. The fact that there's no body attached is disturbing enough. Even more disturbing is the discovery, a day later, of the matching hand. Both have been recently amputated, and the indications are that the victim was still alive when they were removed. DI Jack Caffery has been newly seconded to the Major Crime Investigation Unit in Bristol. He and Flea soon establish that the hand belong to a young man who has recently disappeared. Their search for him--and for his abductor--lead them into the darkest recesses of Bristol's underworld, where drug addiction is rife, where street-kids sell themselves for a hit, and where one of Africa's most disturbing rituals may be making an unexpected appearance.