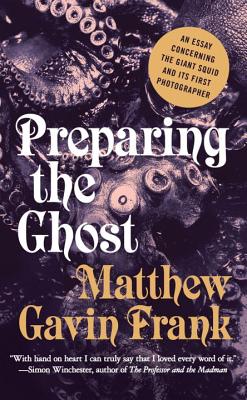 An Essay Concerning the Giant Squid and Its First Photographer

A Shelf Awareness Best Book of 2014

Memory, mythology, and obsession collide in this strikingly original and enigmatic account of the first man to photograph a giant squid.


Moses Harvey was the eccentric Newfoundland reverend and amateur naturalist who first photographed the near-mythic giant squid in 1874, draping it over a shower curtain rod to display its magnitude. In Preparing the Ghost, what begins as Moses’s story becomes much more, as fellow squid-enthusiast Matthew Gavin Frank boldly winds his narrative tentacles around history, creative nonfiction, science, memoir, and meditations about the interrelated nature of them all. In a full-hearted, lyrical style reminiscent of Geoff Dyer, Frank weaves in playful forays about his research trip to Moses’s Newfoundland home, Frank’s own childhood and family history, and a catalog of bizarre facts and lists that recall Melville’s story of obsession with another deep-sea dwelling leviathan. Though Frank is armed with impressive research, what he can’t know about Harvey he fictionalizes, quite explicitly, as a way of both illuminating the scene and exploring his central theme: the big, beautiful human impulse to obsess.


Praise For Preparing the Ghost: An Essay Concerning the Giant Squid and Its First Photographer…

[A] slyly charming book-length essay… The connections between all these themes—giant squids, Poppa Dave, ice cream—are fragile, but for the most part, Frank knows just how much weight they can bear. And there is some stunning writing and perversely wonderful research along the way… Alluring. It’s hard to imagine a better book about not entirely understanding giant squids.
— Jon Mooallem - The New York Times Book Review

In a book as coiled, strange and tentacular as its subject, Matthew Gavin Frank considers the squid. Preparing the Ghost: An Essay Concerning the Giant Squid and Its First Photographer is an act of love and erudition.

One of the handsomest, most elusive creatures on earth and its first photographer get their close-up in Matthew Gavin Frank’s marvelous Preparing the Ghost.

Totally original and haunting in the way you’d expect a book about a real life Presbyterian clergyman and amateur naturalist from the late-19th century—and his relationship with a giant squid—to be.
— Jason Diamond - Flavorwire

A great essay takes us into the author’s polymathic mind and out to the wondrous world, teaching us something we didn’t know we wanted to know. In Preparing the Ghost’s deliciously delirious layering of science, biography, history, mystery, linguistics, myth, philosophy, epistemology, adventure, travel Matthew Gavin Frank has given us a truly great essay.

Preparing the Ghost reads like a cross between Walt Whitman and a fever dream. Who would think squid and ice cream go together? I remained riveted to the very last word.

Matthew Gavin Frank reinvents the art of research in extraordinarily imaginative ways. His meditation on the briefly known and the forever unknowable courts lore (both family and creaturely), invites the fantastical, heeds fact, and turns the human drive to notate and list into a gesture of lyrical beauty.
— Lia Purpura, author of On Looking and Rough Likeness

[Frank] sifts through historical interest in the squid to ask questions about empathy, our means for ‘sharing our obsessions,’ and the role of myth… Woven into these big questions are little stories, personal anecdotes, family history, and profiles of contemporary and historic players in the narrative of the giant squid. In this blending of the large and small, Frank sees human lives that are ‘delicious, disturbing, and downright huge,’ and expresses a personal experience with a seldom encountered subject.
— Publishers Weekly

Preparing the Ghost is the most original book I have read in years. Opening with an arresting image that literally haunts him, Matthew Gavin Frank unstrings history and reweaves a narrative from its threads, from fiction and news reporting and his own life, to remind us that every experience is a story braid. To remind us that life and love and death—all are beauty.

— Lidia Yuknavitch, author of The Chronology of Water and Dora: A Headcase

Matthew Gavin Frank has made a book into a curiosity cabinet, one dedicated to the storied giant squid. A mysterious but seductive mix of history, creative non-fiction, memoir, and poetry, Preparing the Ghost is written with contagious passion. In this original book, Frank weaves his imagination through history’s gaps, and keeps the reader riveted with the lure of the unknown and dark, sultry prose.

— Megan Mayhew Bergman, author of Birds of a Lesser Paradise

What a marvelous essay Matthew Gavin Frank has written. Preparing the Ghost is driven by narrative, by lyric association, by memoir, by lists, by research, by imagination. Frank delivers this story of Moses Harvey, the first person to photograph the giant squid, with a passion as supercharged as Harvey’s own. Above all, this is an essay about obsession, mystery, mythmaking, and the colossal size of our lives. Take it all in. Revel in its majesty.

— Lee Martin, author of Such a Life

Like the giant squid at the center of this enchanting inquiry, Mathew Gavin Frank’s Preparing the Ghost is a multi-tentacled and entirely captivating saga of profound mystery and relentless pursuit.

Matthew Gavin Frank has fashioned a book-length essay marked by unforeseen oneiric asides, and of real and imaginary escapades in search of one Newfoundlander’s giant squid. Preparing the Ghost is a mash-up of a meditation on the nature of myth, the magnetic distance between preservation and perseverance, and the “sympathetic cravings” that undergird pain. In Frank’s heart-thumping taxonomy, monstrous behemoths square nicely with butterflies and ice cream. Don’t ask me how: read this book!

— Mary Cappello, author of Swallow: Foreign Bodies, Their Ingestion, Inspiration, and the Curious Doctor who Extracted Them

Part history, part lyric poem, part detective novel—Matthew Gavin Frank’s Preparing the Ghost is just as intriguing and hard to classify as its subject. I never thought I’d care so much about the elusive giant squid, but thanks to this book, I can’t help but see its shadow everywhere.

— Brenda Miller, author of Season of the Body and Listening Against the Stone

Matthew Gavin Frank is the author of Preparing the Ghost and The Mad Feast. He teaches creative writing and lives in Marquette, Michigan.
Loading...
or
Not Currently Available for Direct Purchase