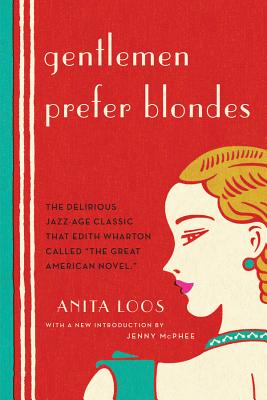 Loos’s classic tale shows that questions of women and power—more relevant today than ever—can come in the most alluring of packages.

This delirious 1925 Jazz Age classic introduced readers to Lorelei Lee, the small-town girl from Little Rock, who has become one of the most timeless characters in American fiction. Outrageous and charming, this not-so-dumb blonde has been portrayed on stage and screen by Carol Channing and Marilyn Monroe and has become the archetype of the footloose, good-hearted gold digger (not that she sees herself that way). Masquerading as her diaries, Gentlemen Prefer Blondes follows Lorelei as she entertains suitors across Europe before returning home to marry a millionaire. In this delightfully droll and witty book, Lorelei’s glamorous pragmatism shines, as does Anita Loos’s mastery of irony and dialect. A craze in its day and with ageless appeal, this new Liveright edition puts Lorelei back where she belongs: front and center.

Lorelei Lee’s wide-eyed ditziness is nothing less than a joy forever.
— Michael Dirda

First published by Liveright in 1925—and now brought back into print by the same house—[Gentlemen Prefer Blondes] will find a new audience to delight, amaze and amuse… Lorelei is a combination of insouciance, innocence and street savvy that is irresistible.

Born in California, Anita Loos (1893–1981) was herself a celebrity of the Jazz Age that produced Lorelei Lee. She began writing movie scripts by the time she was twelve, and before her death in 1981 she had written an enormous number of stories, screenplays, and more. She was also the author of an autobiography, A Girl Like I.

Jenny McPhee is the author of A Man of No Moon, No Ordinary Matter, and The Center of Things. She lives in London.
Loading...
or
Not Currently Available for Direct Purchase