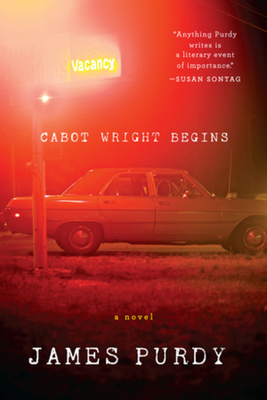 Cabot Wright Begins, first published in 1964, may be one of the most neglected masterpieces in post–World War II American literature.

Cabot Wright is a handsome, Yale-educated stockbroker and scion of a good family. He also happens to be the convicted rapist of nearly three hundred women. Bernie Gladhart is a naive used-car salesman from Chicago, who—spurred on by his ambitious wife—decides to travel to Brooklyn and write the Great American Novel about the recently paroled Cabot Wright. As Bernie tries to track down Wright in Brooklyn, he encounters a series of bizarre and Dickensian characters and sets in motion an extraordinary chain of events. In this merciless and outrageous satire of American culture, cult writer James Purdy is unsparing and prophetic in his portrayal of television, publishing, Wall Street, race, urban poverty, sex, and the false values of American culture in a work compared to Candide by Susan Sontag. Considered too scabrous for the stifling culture mores of the early 1960s, Purdy's comic fiction evokes "an American psychic landscape of deluded innocence, sexual obsession, violence and isolation" (New York Times).

James Purdy, born in 1914, is undergoing a major literary renaissance. The author of Malcolm and now The Complete Short Stories of James Purdy, he lived in New York until his death in 2009.
Loading...
or
Not Currently Available for Direct Purchase