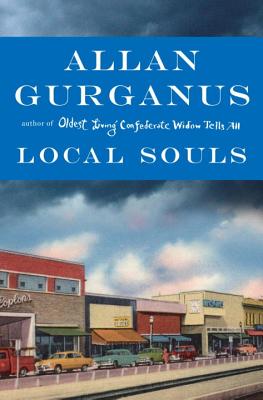 With the meteoric success of Oldest Living Confederate Widow Tells All, Allan Gurganus placed himself among America’s most original and emotionally engaged storytellers. If his first comic novel mapped the late nineteenth-century South, Local Souls brings the twisted hilarity of Flannery O’Connor kicking into our new century.

It’s been 12 years since Gurganus last published a full-length work—but if there remains any doubt of his literary greatness, his fifth book, Local Souls, should put it to rest forever…. A tour de force in the tradition of Hawthorne. It shows that Gurganus’s vast creative and imaginative powers, still rooted in the local, are increasingly universal in scope and effect. The book is an expansive work of love…Gurganus moves beyond [Sherwood] Anderson and Faulkner in calling into question the very notion of ‘inappropriate’: the emotional misalignments in his fiction feel both understandable and familiar. Like Chekhov and Cheever before him, Gurganus registers an enormous amount of compassion for the characters he holds to the fire.

Allan Gurganus breathes so much life into the town of Falls, North Carolina, his reader is able to walk down the streets and mingle with the local souls. This book underscores what we have long known—Gurganus stands among the best writers of our time.
— Ann Patchett

Vivid language, provocative sentence structure, and metaphors that elevate the reader’s consciousness. [Gurganus] shares with his southern cohorts a delight in discovering the quotidian within lives led under extraordinary, even bizarre circumstances.
— Booklist

— Publishers Weekly, "Pick of the Week"

In this first work in 12 years, Gurganus offers three luscious, perceptively written pieces, each as rich as any full-length novel and together exploring the depth of our connections…. In all three novellas, there’s a pervasive sense of the power of community expectations and the question of whether we can challenge fate…. These pieces are so fresh and real that the reader has the sense of walking through a dissolving plate-glass window straight into the lives of the characters. Highly recommended.
— Library Journal, starred review

A serious and important American writer—his work has meant a lot to me over time… It’s good to have him back after a long absence.
— Dwight Garner - New York Times

Gurganus [is] fearfully gifted…. The gem of Local Souls is the gorgeous Decoy, in which Gurganus removes the gloves and delivers the literary equivalent of a bare-knuckled knockout. Decoy is so good that you want to lob all sorts of adjectives its way: warm, humane, profound, sagacious, hilarious, nostalgic, and incisive…. The last pages of Local Souls prove once again that there is no writer alive quite like Allan Gurganus.

Allan Gurganus proves once again that small-town life in the New South can be as tragic and twisted as anything out of an ancient Greek playbook…. The chatty, roundabout storytelling, the wicked humor and sense of the absurd often disguise the gravity of these investigations into life’s tendency to ‘retract its promise overight,’ to ‘become a vale of tears breaking over you in sudden lashing.’ Hidden above the safe confines of the Falls, Zeus readies his lightning bolts.
— Gina Webb - Atlanta Journal-Constitution

Allan Gurganus is widely translated, a Guggenheim Fellow, and a member of the American Academy of Arts and Letters. Adaptations of his fiction have earned four Emmys, and his stories have been appearing in The New Yorker since 1974. He lives in a small town in North Carolina.
Loading...
or
Not Currently Available for Direct Purchase