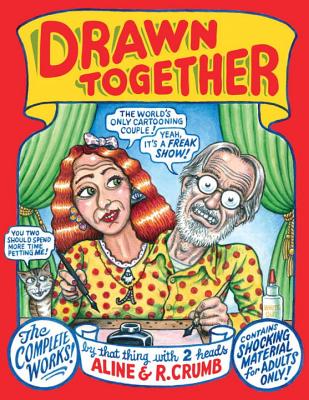 The Collected Works of R. and A. Crumb

Who could have imagined that in 1972, when Aline Kominsky, a Long Island escapee and bodaciously talented artist, broke her foot one rainy fall day, it would result in the most unique collaboration in comics history? Laid up in her house, she was persuaded by R. Crumb, her nerdy, neurotic boyfriend, to pass the time drawing together a “two-man” comic. The result is a jaw-dropping yet tender account, not only of the joys and challenges of a legendary marriage but also of the obstacles faced by struggling female artists. In Drawn Together, our foremost male-female cartooning couple recall their success at shocking America with Weirdo Magazine, the life-altering birth of their precocious daughter Sophie, and their astonishing move to the safe haven of France. With an irresistible introduction and a striking four-color section, Drawn Together becomes a graphic cause-célebre and a must-have for any comics devotee.


Praise For Drawn Together: The Collected Works of R. and A. Crumb…

Since the 1970s, pioneering underground comics creators R. Crumb and Aline Crumb (nee Kominsky) have been drawing comics together, their distinct art styles sharing the same panels…. The thematic cohesion, despite the two very different styles, is an achievement, one further enhanced by guest illustrations from daughter Sophie and cameos from Art Spiegelman and Charles Burns. A must for Crumb fans.
— Publishers Weekly

The collection documents the changes in their lives as they’ve grown older, had a daughter (now a published cartoonist herself), moved to the south of France, and received more attention than they’d wanted through a couple of films (a documentary on the Crumb family and the adaptation of American Splendor, the acclaimed bio-pic of friend and collaborator Harvey Pekar). From the bathroom to the bedroom, they respond to the question of just how open and honest a marital comic can be. Not the most ambitious Crumb work, but there’s a lot of love here.

Starred review. If his drawing is wonderfully detailed, volumetric, and fluid—the justly most famous and admired comics style of our time—hers is flat, messy, childishly exuberant, an avatar of the art brut manners of such of her peers as Linda Barry, Roz Chast, and Nicole Hollander. That contrast between them becomes yet more grist for their endless, self-conscious, ludicrously frank (often literally unbuttoned; this is adult comics, folks) yattering on sex, art, parenthood, guilt, fashion, collecting, shopping mania, the Jews and the goys, France and the French, him being more famous than her, blah blah blah. And gloriosky! It gets funnier as the years pile up. The last long story here, “A Couple a’ Nasty, Raunchy Old Things,” is as hilarious as the best routines of George and Gracie, the Bickersons, and The Honeymooners.

[One] of the 50 sublime coffee table books for the true sophisticate.
— Flavorwire

Drawn Together brims with life… one can’t help but be charmed by the Crumbs…. A wonderful creation… offers much more than even its considerable bulk suggests.

Aline Crumb is an American underground comics artist and the author of Need More Love: A Graphic Memoir. She lives in southern France.
Loading...
or
Not Currently Available for Direct Purchase