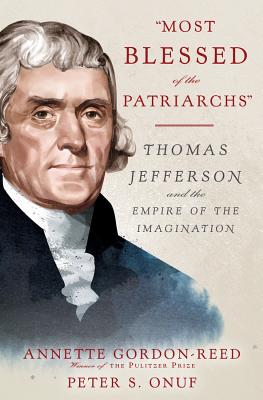 "Most Blessed of the Patriarchs"

Thomas Jefferson and the Empire of the Imagination

A groundbreaking work of history that explicates Thomas Jefferson’s vision of himself, the American Revolution, Christianity, slavery, and race.

Thomas Jefferson is often portrayed as a hopelessly enigmatic figure—a riddle—a man so riven with contradictions that he is almost impossible to know. Lauded as the most articulate voice of American freedom and equality, even as he held people—including his own family—in bondage, Jefferson is variably described as a hypocrite, an atheist, or a simple-minded proponent of limited government who expected all Americans to be farmers forever.

Now, Annette Gordon-Reed teams up with America's leading Jefferson scholar, Peter S. Onuf, to present an absorbing and revealing character study that dispels the many clichés that have accrued over the years about our third president. Challenging the widely prevalent belief that Jefferson remains so opaque as to be unknowable, the authors—through their careful analysis, painstaking research, and vivid prose—create a portrait of Jefferson, as he might have painted himself, one "comprised of equal parts sun and shadow" (Jane Kamensky).

Tracing Jefferson's philosophical development from youth to old age, the authors explore what they call the "empire" of Jefferson's imagination—an expansive state of mind born of his origins in a slave society, his intellectual influences, and the vaulting ambition that propelled him into public life as a modern avatar of the Enlightenment who, at the same time, likened himself to a figure of old—"the most blessed of the patriarchs." Indeed, Jefferson saw himself as a "patriarch," not just to his country and mountain-like home at Monticello but also to his family, the white half that he loved so publicly, as well as to the black side that he claimed to love, a contradiction of extraordinary historical magnitude.

Divided into three sections, "Most Blessed of the Patriarchs" reveals a striking personal dimension to his life. Part I, "Patriarch," explores Jeffersons's origins in Virgina; Part II, " 'Traveller,' " covers his five-year sojourn to Paris; and Part III, "Enthusiast," delves insightfully into the Virginian's views on Christianity, slavery, and race. We see not just his ideas and vision of America but come to know him in an almost familial way, such as through the importance of music in his life.

"Most Blessed of the Patriarchs" fundamentally challenges much of what we’ve come to accept about Jefferson, neither hypocrite nor saint, atheist nor fundamentalist. Gordon-Reed and Onuf, through a close reading of Jefferson’s own words, reintroduce us all to our most influential founding father: a man more gifted than most, but complicated in just the ways we all are.


Praise For "Most Blessed of the Patriarchs": Thomas Jefferson and the Empire of the Imagination…

They neither indict nor absolve Jefferson; instead, they aim to make sense of his contradictions for modern sensibilities…A fascinating addition to the Jefferson canon.
— Publishers Weekly (starred and boxed)

With characteristic insight and intellectual rigor, Annette Gordon-Reed and Peter Onuf have produced a powerful and lasting portrait of the mind of Thomas Jefferson. This is an essential and brilliant book by two of the nation’s foremost scholars—a book that will, like its protagonist, endure.
— Jon Meacham, author of Thomas Jefferson: The Art of Power

A peerless team, Annette Gordon-Reed and Peter Onuf pierce the mysteries of Jefferson’s character and at last offer a compelling explanation of how the republican statesman and plantation patriarch could coexist in a single soul. Jefferson’s flaw was not hypocrisy but conviction, his unswerving belief in paternalism as empowering and beneficent.
— Danielle Allen, author of Our Declaration: A Reading of the Declaration of Independence in Defense of Equality

This inspired collaboration takes us as close as we’re likely to get to the way Thomas Jefferson understood himself and his times. Not content with clichés about a man who made his world anew, Gordon-Reed and Onuf show us the world that made the man…. Here is Jefferson as he might have painted his own image, a self-portrait comprised of equal parts sun and shadow.
— Jane Kamensky, author of Copley: A Life in Color

Annette Gordon-Reed is the Carl M. Loeb University Professor at Harvard University. The author of Pulitzer Prize–winning The Hemingses of Monticello, she lives in New York and Cambridge.

Peter S. Onuf is the Thomas Jefferson Memorial Foundation Professor Emeritus at the University of Virginia. He lives in Portland, Maine, and Virginia.