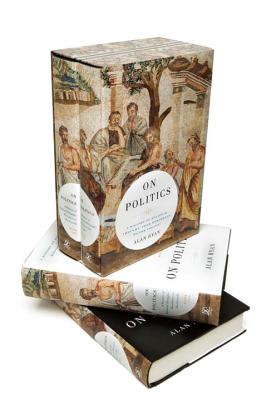 A History of Political Thought: From Herodotus to the Present

Three decades in the making, one of the most ambitious and comprehensive histories of political philosophy in nearly a century.

Both a history and an examination of human thought and behavior spanning three thousand years, On Politics thrillingly traces the origins of political philosophy from the ancient Greeks to Machiavelli in Book I and from Hobbes to the present age in Book II. Whether examining Lord Acton’s dictum that “absolute power corrupts absolutely” or explicating John Stuart Mill’s contention that it is “better to be a human dissatisfied than a pig satisfied,” Alan Ryan evokes the lives and minds of our greatest thinkers in a way that makes reading about them a transcendent experience. Whether writing about Plato or Augustine, de Toqueville or Thomas Jefferson, Ryan brings a wisdom to his text that illuminates John Dewey’s belief that the role of philosophy is less to see truth than to enhance experience. With this unparalleled tour de force, Ryan emerges in his own right as one of the most influential political philosophers of our time.


Praise For On Politics: A History of Political Thought: From Herodotus to the Present…

With an unmatched magisterial command, Alan Ryan powerfully reminds and teaches us how the leading thinkers since classic times can and must inform our debates over how to envision the better world we must build.
— Anthony W. Marx, President, New York Public Library

Alan Ryan has created a vision of the entire surge of Western political thought which is equal to the heroic venture of George Sabine, which I studied in my youth. Ryan demonstrates throughout vivacity, and a tenacious grasp of the human meaning of everything that has transpired in political speculation from the ancients on through the threshhold of our own dark age. I commend particularly his terse eloquence, his capacious erudition, and the verve and judicious intensity with which he somehow allows his whole being to inform his vast scope and deep concern of our human limitations.
— Harold Bloom

In a work of astonishing scope and ambition, Alan Ryan, surveying the whole vast field, concisely charts the welter of conflicting positions and tracks the sometimes thrilling, sometimes catastrophic consequences of political thought.
— Stephen Greenblatt, author of The Swerve: How the World Became Modern

If you want to understand why we think as we do, go back to the ancient Greeks. Alan Ryan brilliantly explains why that is true—and why it matters.
— Mary Beard, author of The Roman Triumph

Alan Ryan has taken a vast range of challenging material written over twenty five centuries in the West and engaged with it in prose of stunning clarity. He displays the intrinsic interest of reflection on writers from Herodotus to yesterday, while showing how it can be a powerful resource for dealing with politics today. It is an amazing achievement to combine so much learning with such lucidity.
— Anthony Appiah, author of Cosmopolitanism

In an age of specialization, we have lost much of the sense of the sweep of the story of Western thinking about politics. In his new book, Alan Ryan has recovered the greatness and deficiencies of that experience. ...Written with an exceptional clarity and presence of voice, Ryan’s book is the best comprehensive statement of the achievements and failures of the Western liberal tradition.
— Tracy B. Strong, UCSD Distinguished Professor, Political Science Department, University of California, San Diego

In lucid, precise and accessible prose, Alan Ryan has written an unparalleled guide for our times to the Western tradition of political thought. From Herodotus through the Christian world and the rise of modernity to our own time, readers will be stimulated to reflect on historical, contemporary and perennial questions.
— Steven Lukes, author of Power: A Radical View

Alan Ryan’s marvelous survey brings the major thinkers to the table, orchestrating a provocative and enlightening conversation across the centuries that offers fresh and illuminating perspectives on perennial political problems. Scholars and engaged citizens will delight in partaking of Ryan’s intellectual feast.
— Peter Onuf, author of Jefferson’s Empire

Magisterial… In more than a thousand pages, Alan Ryan, a longtime Oxford professor who now teaches at Princeton, undertakes to introduce the reader to most of the major political thinkers in Western history…The tensions of modern liberal democratic societies are the intellectual motor of the book… Lively and intellectually engaging… On Politics, like the great works of philosophy it examines, constitutes a powerful brief against the unexamined life.

Monumental… At the heart of the project is a belief that this stuff matters, that the thinkers it revolves around—Plato, Aristotle, Machiavelli, Thomas Hobbes, Karl Marx—remain relevant and fresh… The book is a distillation of [Alan Ryan’s] thinking, both intellectual and practical, and although it can be daunting, the triumph is how, as Ryan takes us through the material, he makes it so much more.
— David Ulin - Los Angeles Times

Starting with Herodotus and concluding with current debates over the environment and humanitarian intervention, Alan Ryan covers an extraordinary range of material with fluency and wisdom… As an accessible introduction to the nature of political thought as well as a guide to what is greatest exponents have argued, On Politics could scarcely be bettered. …On Politics is an outstanding and original work.

Alan Ryan, after decades at Princeton University, was warden of New College, University of Oxford, where he was a professor of political theory. He is the author of John Dewey and the High Tide of American Liberalism and Bertrand Russell: A Political Life, among other works.
Loading...
or
Not Currently Available for Direct Purchase