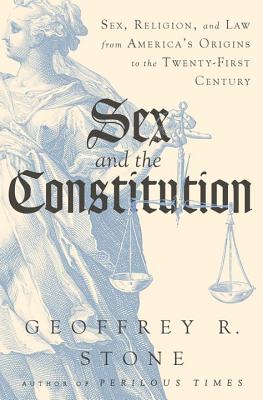 Sex and the Constitution

Sex, Religion, and Law from America's Origins to the Twenty-First Century

There has never been a book like Sex and the Constitution, a one-volume history that chapter after chapter overturns popular shibboleths, while dramatically narrating the epic story of how sex came to be legislated in America.

Beginning his volume in the ancient and medieval worlds, Geoffrey R. Stone demonstrates how the Founding Fathers, deeply influenced by their philosophical forebears, saw traditional Christianity as an impediment to the pursuit of happiness and to the quest for human progress. Acutely aware of the need to separate politics from the divisive forces of religion, the Founding Fathers crafted a constitution that expressed the fundamental values of the Enlightenment.

Although the Second Great Awakening later came to define America through the lens of evangelical Christianity, nineteenth-century Americans continued to view sex as a matter of private concern, so much so that sexual expression and information about contraception circulated freely, abortions before “quickening” remained legal, and prosecutions for sodomy were almost nonexistent.

The late nineteenth and early twentieth centuries reversed such tolerance, however, as charismatic spiritual leaders and barnstorming politicians rejected the values of our nation’s founders. Spurred on by Anthony Comstock, America’s most feared enforcer of morality, new laws were enacted banning pornography, contraception, and abortion, with Comstock proposing that the word “unclean” be branded on the foreheads of homosexuals. Women increasingly lost control of their bodies, and birth control advocates, like Margaret Sanger, were imprisoned for advocating their beliefs. In this new world, abortions were for the first time relegated to dank and dangerous back rooms.

The twentieth century gradually saw the emergence of bitter divisions over issues of sexual “morality” and sexual freedom. Fiercely determined organizations and individuals on both the right and the left wrestled in the domains of politics, religion, public opinion, and the courts to win over the soul of the nation. With its stirring portrayals of Supreme Court justices, Sex and the Constitution reads like a dramatic gazette of the critical cases they decided, ranging from Griswold v. Connecticut (contraception), to Roe v. Wade (abortion), to Obergefell v. Hodges (gay marriage), with Stone providing vivid historical context to the decisions that have come to define who we are as a nation.

Now, though, after the 2016 presidential election, we seem to have taken a huge step backward, with the progress of the last half century suddenly imperiled. No one can predict the extent to which constitutional decisions safeguarding our personal freedoms might soon be eroded, but Sex and the Constitution is more vital now than ever before.

Praise For Sex and the Constitution: Sex, Religion, and Law from America's Origins to the Twenty-First Century…

Writing confidently and expertly about several centuries of American laws regulating sex, Stone shows that the line between moral and religious reasoning was almost always illusory. . . . Sex and the Constitution is most persuasive when Stone turns to America, and his comprehensive knowledge of constitutional law is put on full display. He is especially good on the eighteenth century, bringing a bracing and much-needed dose of reality about the Founders’ views of sexuality. . . . [A] very important book.

A comprehensive history and analysis of our law's fitful and frequently schizophrenic treatment of sex…A story that is both fascinating and maddening…This book brings us all the way up to the controversies of our day (including gay marriage) and offers tantalizing glimpses of some of the legal battles that lie ahead…Those interested in adding historical context to their thinking about these hot button issues would be well-advised to add Stone's book to their summer reading list.
— David Wecht - Pittsburgh Post-Gazette

This masterpiece is the rarest of combinations: a page-turner that is also a magisterial font of wisdom.
— Laurence H. Tribe, author of The Invisible Constitution

This fascinating account of how sexual mores, religion, and law have intersected or—more often—collided throughout American history is really about even more than that. It’s about the role of law in maintaining a civil society in a diverse twenty-first-century America, and a call to the Supreme Court to step up to the challenge.
— Linda Greenhouse, winner of the Pulitzer Prize and Knight Distinguished Journalist in Residence at Yale Law School

A volume of lasting significance that quickly will become essential reading not only for law students and scholars but for all who want to better understand sweeping cultural transformations that continue to roil society.
— Lee C. Bollinger, president, Columbia University

A superb examination of the history of how the law has regulated sexual behavior and sexual expression from the ancient world to today.
— Erwin Chemerinsky, dean and Raymond Pryke Professor of First Amendment Law, University of California, Irvine School of Law

Sex, which has simultaneously inspired and eluded regulation through the ages, has been the focus of many of our greatest constitutional controversies. No one is better suited than the always erudite and lucid Geoffrey Stone to provide the panoramic treatment that the subject deserves. Unless you are the rare person who has no interest in either the Constitution or sex, you will want to read this book.
— David Cole, author of Engines of Liberty: The Power of Citizen Activists to Make Constitutional Law

This title is a commanding synthesis of scholarship on over two centuries of American legal debate and practice regarding these issues, and would work well as the core text for a course of the subject. . . . Stone’s analysis is highly recommended for anyone seeking an introduction to the history of U.S. law and sexual expression.
— Publisher's Weekly

Geoffrey R. Stone is the author of the prize-winning Perilous Times. He is the Edward H. Levi Distinguished Service Professor of Law at the University of Chicago and one of our nation’s leading constitutional scholars.
Loading...
or support indie stores by buying on