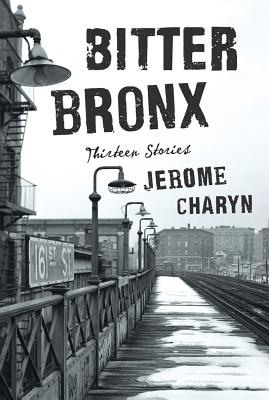 Brooklyn is dead. Long live the Bronx! In Bitter Bronx, Jerome Charyn returns to his roots and leads the literary renaissance of an oft-overlooked borough in this surprising new collection.

In Bitter Bronx, one of our most gifted and original novelists depicts a world before and after modern urban renewal destroyed the gritty sanctity of a land made famous by Ruth, Gehrig, and Joltin' Joe.

Bitter Bronx is suffused with the texture and nostalgia of a lost time and place, combining a keen eye for detail with Jerome Charyn's lived experience. These stories are informed by a childhood growing up near that middle-class mecca, the Grand Concourse; falling in love with three voluptuous librarians at a public library in the Lower Depths of the South Bronx; and eating at Mafia-owned restaurants along Arthur Avenue's restaurant row, amid a "land of deprivation…where fathers trundled home…with a monumental sadness on their shoulders."

In "Lorelei," a lonely hearts grifter returns home and finds his childhood sweetheart still living in the same apartment house on the Concourse; in "Archy and Mehitabel" a high school romance blossoms around a newspaper comic strip; in "Major Leaguer" a former New York Yankee confronts both a gang of drug dealers and the wreckage that Robert Moses wrought in his old neighborhood; and in three interconnected stories—"Silk & Silk," "Little Sister," and "Marla"—Marla Silk, a successful Manhattan attorney, discovers her father's past in the Bronx and a mysterious younger sister who was hidden from her, kept in a fancy rest home near the Botanical Garden. In these stories and others, the past and present tumble together in Charyn's singular and distinctly "New York prose, street-smart, sly, and full of lurches" (John Leonard, New York Times).

Throughout it all looms the "master builder" Robert Moses, a man who believed he could "save" the Bronx by building a highway through it, dynamiting whole neighborhoods in the process. Bitter Bronx stands as both a fictional eulogy for the people and places paved over by Moses' expressway and an affirmation of Charyn's "brilliant imagination" (Elizabeth Taylor, Chicago Tribune).

Jerome Charyn's stories have appeared in The Atlantic, Paris Review, American Scholar, Epoch, Narrative, Ellery Queen, and other magazines. His most recent novel is I Am Abraham. He lived for many years in Paris and currently resides in Manhattan.

A borough native wrestles with con men, gangsters and the biggest villain of all—Robert Moses…. One is left with no doubt that Jerome Charyn’s shriek, his war cry, his own peculiar music, was born [in the Bronx].
— Abraham Socher

[Jerome Charyn] is to the Bronx what Saul Bellow, early in his career, was to Upper Broadway—bard, celebrant, mythologizer.
— Jonathan Yardley

It is no small achievement to be the Babel of the Bronx.
— Leslie Epstein

Sharp-edged short stories…Charyn’s narrative sleight of hand is wonderfully at play…. Despite the hard edges, and there are many, a rich sweetness flows just below the surface of Bitter Bronx.

[T]here are certain constants in Charyn’s work: an energetic, urbane prose, a playful approach to narrative, a fascination with history, and a downbeat, noir-ish perspective. This fatalistic outlook coexists comfortably with the ebullient verve and propulsion of his prose…. Whether writing about Yiddish theatre or silent film or movie palaces or old Bronx neighborhoods, Charyn is the curator, celebrant, and mourner of lost worlds…. The prose impresses with its accumulation of apt details, fresh diction, and serpentine syntax…. Is Charyn truly a romantic or a trickster? Hard to say on the basis of these entertaining stories: probably both. They are written with confidence, fluidity, mischievous aplomb, and a lifetime’s worth of acquired literary skill. A light ironic touch peeps through these tales of doomed passion, as though the septuagenarian Charyn were mocking his own former searching for a movie-type love, his previous ‘constant adolescence’ of hungering for dream women.
— Phillip Lopate

In this collection of stories, Charyn’s characters leave blighted streets only to boomerang back to a part of New York ‘in permanent recession.’ With echoes of Walt Whitman’s fantastical city and the hard-broiled territory of Mickey Spillane, Bitter Bronx elevates the borough’s stoops and sidewalks into the realm of myth.


Jerome Charyn is one of the most important writers in American literature.
— Michael Chabon

Jerome Charyn is merely one of our finest writers, with a polymorphous imagination and crack comic timing. Whatever milieu he chooses to inhabit, his characters sizzle with life, and his sentences are pure vernacular music, his voice unmistakable.
— Jonathan Lethem

Charyn, like Nabokov, is that most fiendish sort of writer—so seductive as to beg imitation, so singular as to make imitation impossible.
— Tom Bissell

Jerome Charyn's Bronx is a landscape of magic and passion. With…American yearning and a stage full of unforgettable characters.

Grifters, gangs, vamps, and lost souls pursue gritty lives in ‘the brick wilderness of the Bronx’ in this collection of tales by a veteran storyteller and native of the New York borough…. Charyn's staccato style is full of jolts, surprising observations, and turns of phrase. It works well with the rough struggle for survival and success….

Tough on the outside but tender at heart, the 13 stories in this volume serve as a nostalgic elegy to the Bronx of the past…. Mixing equal parts grit and charm, there’s no need to have set foot in the Bronx to enjoy these stories.

Charyn constructs hella work, powerful images in condensed language. While some stories are set in the near or distant past, others feel timeless to the point of taking place just yesterday.
— Douglas Lord