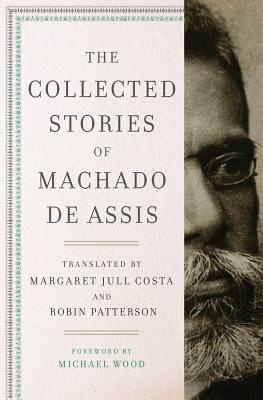 A landmark event, the complete stories of Machado de Assis finally appear in English for the first time in this extraordinary new translation.

Widely acclaimed as the progenitor of twentieth-century Latin American fiction, Machado de Assis (1839–1908)—the son of a mulatto father and a washerwoman, and the grandson of freed slaves—was hailed in his lifetime as Brazil’s greatest writer. His prodigious output of novels, plays, and stories rivaled contemporaries like Chekhov, Flaubert, and Maupassant, but, shockingly, he was barely translated into English until 1963 and still lacks proper recognition today. Drawn to the master’s psychologically probing tales of fin-de-siecle Rio de Janeiro, a world populated with dissolute plutocrats, grasping parvenus, and struggling spinsters, acclaimed translators Margaret Jull Costa and Robin Patterson have now combined Machado’s seven short-story collections into one volume, featuring seventy-six stories, a dozen appearing in English for the first time.

Born in the outskirts of Rio, Machado displayed a precocious interest in books and languages and, despite his impoverished background, miraculously became a well-known intellectual figure in Brazil’s capital by his early twenties. His daring narrative techniques and coolly ironic voice resemble those of Thomas Hardy and Henry James, but more than either of these writers, Machado engages in an open playfulness with his reader—as when his narrator toys with readers’ expectations of what makes a female heroine in “Miss Dollar,” or questions the sincerity of a slave’s concern for his dying master in “The Tale of the Cabriolet.”

Predominantly set in the late nineteenth-century aspiring world of Rio de Janeiro—a city in the midst of an intense transformation from colonial backwater to imperial metropolis—the postcolonial realism of Machado’s stories anticipates a dominant theme of twentieth-century literature. Readers witness the bourgeoisie of Rio both at play, and, occasionally, attempting to be serious, as depicted by the chief character of “The Alienist,” who makes naively grandiose claims for his Brazilian hometown at the expense of the cultural capitals of Europe. Signifiers of new wealth and social status abound through the landmarks that populate Machado’s stories, enlivening a world in the throes of transformation: from the elegant gardens of Passeio Público and the vibrant Rua do Ouvidor—the long, narrow street of fashionable shops, theaters and cafés, “the Via Dolorosa of long-suffering husbands”—to the port areas of Saúde and Gamboa, and the former Valongo slave market.

One of the greatest masters of the twentieth century, Machado reveals himself to be an obsessive collector of other people’s lives, who writes: “There are no mysteries for an author who can scrutinize every nook and cranny of the human heart.” Now, The Collected Stories of Machado de Assis brings together, for the first time in English, all of the stories contained in the seven collections published in his lifetime, from 1870 to 1906. A landmark literary event, this majestic translation reintroduces a literary giant who must finally be integrated into the world literary canon.


Praise For The Collected Stories of Machado de Assis…

The Collected Stories reveals the arc of Machado’s career, from the straightforward love stories to the cerebral and unpredictable later works.... Machado’s stories pulse with life.... To Machado, your identity and the contours of your world are formed not just by your circumstances but by what you think about habitually. You are what you contemplate, so choose wisely. These stories are a spectacular place to start.

For the first time, the short stories of this 19th-century Brazilian master have been collected and translated into English, allowing the reader to trace the arc of Machado’s career, from the straightforward early love stories to the postmodern later works. Certain preoccupations persist: alluring widows, naïve young men, a fondness for coincidence. Above all looms the figure of the bibliomane. 'This is my family,' one says, pointing to his bookshelf. Like his characters, Machado was a creature of literature; ink ran in his veins. It is breathtaking to see the development of his style as well as his deep engagement with storytelling all over the world.
— New York Times, "Times Critics' Top Books of 2018"

Perhaps the most hopeful book to appear in 2018 is The Collected Stories of Machado de Assis…. an enormous, gorgeously designed story omnibus from the eternal optimists at Liveright Publishing.... Given a fresh translation by the accomplished duo of Margaret Jull Costa and Robin Patterson, these 76 stories move among a bewildering range of traditions.... [A] watershed collection.

A landmark volume that will be the first place that most Americans encounter [De Assis]…. The Collected Stories, nearly a thousand pages long, captures the greatest range of his writing that has ever existed in a single English volume. Heroically translated by Margaret Jull Costa and Robin Patterson, the book gathers almost four decades of work, from 1870 to 1906. Machado de Assis is light and fun in a way one seldom expects of authors who end up as statues…. Machado is proof that cosmopolitanism comes from reading, not from travel: through books, he knew the whole world.

A welcome omnibus edition of short fiction by the writer widely considered the greatest to have come out of Brazil.... Sometimes Machado de Assis reads like a European modernist (‘On that day—sometime around 2222, I imagine—the paradox will take off its wings and put on the thick coat of common truth’), at others like the contemporary of Melville and Flaubert that he was (‘I succumbed to the morbid pleasure of tormenting myself, for no good reason’). In whatever regard, this collection offers plenty of evidence for why he enjoys the reputation he does, a pioneer of moods and modes that include fables, thin satires, and even gothic romances. Essential to students of Latin American and world literature.
— Kirkus Reviews [Starred Review]

A great ironist, a tragic
comedian. . . . In his books, in their most comic moments, he underlines the
suffering by making us laugh.
— Philip Roth

The greatest writer ever
produced in Latin America.
— Susan Sontag

A major literary event… One of the pleasures of reading Machado is to encounter this comedy of detail, of human particulars… There is a worldly hunger in Machado’s writing, an openness to both life and art.... For Machado, literature begets more literature. He delights in playing with form and narrative; in this volume there are stories written as lectures, stories written entirely in dialogue, and stories in which literary theory itself is mocked.
— Morten Høi Jensen, Los Angeles Review of Books

The fons and origo of it all, Machado de Assis . . . so light in touch, so clearly the product of a fantasticating imagination . . . as to make one suspect that he had descended into the South American literary wilderness of that period from some Dänikenian chariot of gods.

Machado De Assis (1839–1908) was born in Rio de Janeiro, Brazil. He is the groundbreaking author of such works as Quincas Borba, Dom Casmurro, as well as The Collected Stories of Machado de Assis.

Award-winning translator Robin Patterson lives in England.
or support indie stores by buying on
(This book is on backorder)